BY Marcy Cohen on December 18, 2018 | Comments: one comment
Related : Soap Opera, Spoiler, Television, The Young and the Restless 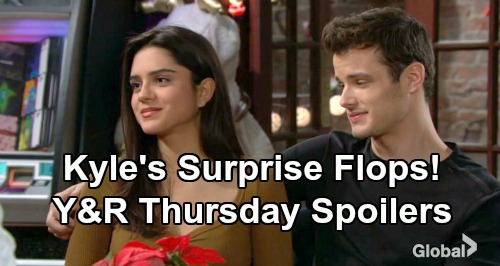 The Young and the Restless (Y&R) spoilers for Thursday, December 20, tease that Kyle (Michael Mealor) will be excited about his big surprise. In Wednesday’s Y&R episode, Kyle gets a fun beach scene ready at the Abbott mansion. Since Lola’s been a bit homesick for Miami, this is the perfect way to remind Lola of the sand and sun.

Lola will probably be impressed at first, but things will quickly head downhill on Thursday. The Young and the Restless spoilers say Lola will end up nodding off during their night together. Naturally, Kyle will be bummed that he couldn’t keep Lola’s attention. She’ll undoubtedly explain that work’s left her running on empty, but that won’t ease the pain of Kyle’s disappointment.

Of course, Kyle also has some competition for Lola’s heart. She previously shut down Fen’s (Zach Tinker) attempts to win her over, but Kyle may worry anyway. He could easily start reading more into their growing connection. Kyle had better be careful about being too possessive in the coming weeks. That’s not something Lola’s on board with at all!

In the meantime, Ana (Loren Stitt) will overstep with Devon (Bryton James) and cause a serious issue. Will this be a personal crisis or a professional one? Ana might get too pushy about Devon’s coping methods or this could be about helping out Fen. Although Kyle may have concerns about Fen’s interest in Lola, The Young and the Restless seems to be heading for a Fen and Ana pairing instead.

Elsewhere, Sharon (Sharon Case) won’t be able to take the tension anymore. She’ll hate fighting with Mariah (Camryn Grimes), so she’ll give her a call and hope to make peace. When Mariah doesn’t pick up, Sharon will try again…and again…and again.

Tessa (Cait Fairbanks) will finally suggest that Mariah really needs to answer the phone. Sharon isn’t going to stop and Tessa doesn’t want to be responsible for destroying their bond anyway. The Young and the Restless spoilers say Mariah will indeed pick up, but she’ll reject Sharon’s invitation to meet. She’ll argue that Sharon isn’t going to support her relationship, so there’s nothing to discuss.

Sharon’s holiday spirit could help lighten up all the drama next week, but there’s no guarantee she’ll stand down for good. It’s clear that Tessa needs to watch her back! We’ll give you updates as other Y&R news comes in. Stay tuned to the CBS soap and don’t forget to check CDL often for the latest Young and the Restless spoilers, updates and news.