The Young and the Restless Spoilers: Sharon Plots Tessa’s Downfall – How Far Will She Go to Destroy Mariah’s Relationship?

BY Heather Hughes on December 18, 2018 | Comments: one comment
Related : Soap Opera, Spoiler, Television, The Young and the Restless 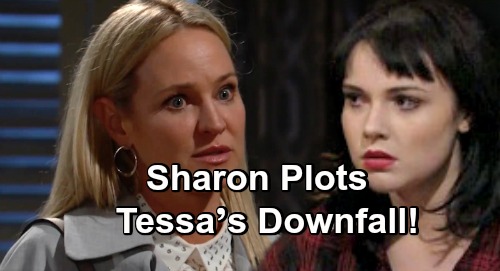 The Young and the Restless (Y&R) spoilers tease that Sharon (Sharon Case) will have a major decision to make. She recently had some serious confrontations with Mariah (Camryn Grimes), so she’ll reach out and try to smooth things over later this week. However, Mariah won’t be interested as long as Sharon stands her ground on Tessa (Cait Fairbanks). She’s obviously not going to budge on this.

If Sharon wants to make amends, she’ll have a couple options to choose from. For starters, she could suck it up and let Mariah live her life, which would probably be the wisest thing to do. Sharon could also pretend to be on board with “Teriah” and secretly do some plotting. After all, she made an awfully ominous statement during her last argument with Mariah.

Once Sharon sabotaged Tessa’s attempt to get a job at the GCAC, she made her plans crystal clear. Mariah was furious as Sharon declared, “If you refuse to get yourself out of a relationship with that criminal…and she will not let you go on her own freewill, then I as the person who loves you the most on earth am going to have to make sure that she has no other choice!”

Of course, this is a shocking change from Sharon’s previous attitude. Even after the blackmail was revealed, Sharon vowed to support whatever her Mariah decided. She also let Victoria (Amelia Heinle) and Nikki (Melody Thomas Scott) know they should be ashamed for terrorizing Tessa, but now she’s calling Tessa vermin and acting like a kidnapping plot was no biggie.

Sharon’s convinced that Tessa is manipulating Mariah as part of some long con, but does that really make sense? Noah (Robert Adamson) is a member of the very wealthy and powerful Newman family, so he was the ideal mark. Mariah isn’t a reasonable target, especially when Tessa has repeatedly refused to accept a dime from her.

Tessa also rejected Kyle (Michael Mealor) twice when he first returned, so she passed up her chance at the Abbott fortune for Mariah. She seems to be truly in this for love. That said, The Young and the Restless fans can’t blame Sharon for being wary. Tessa has certainly made her fair share of mistakes and now Sharon’s worried more will follow.

How far will Sharon go to get Tessa out of Mariah’s life forever? If Sharon really wants to pull this off, she might have to be cruel and go for Tessa’s Kryptonite. She could find out Crystal’s (Morgan Obenreder) location and threaten to blab if Tessa doesn’t scram. Tessa wouldn’t want Crystal to get thrown behind bars, so she’d be backed into a corner.

Then again, Sharon might stage some sort of setup to make it look like Tessa screwed up again. She could rely on a lie to turn Mariah against Tessa and tear them apart. Regardless, Cait Fairbanks is still taping at Y&R and Tessa’s redemption seems to be in progress. Perhaps all of this is really building toward some sacrifice that shows Sharon that Tessa’s got some good in her.