BY Heather Hughes on February 13, 2018 | Comments: one comment
Related : Soap Opera, Spoiler, Television, The Young and the Restless 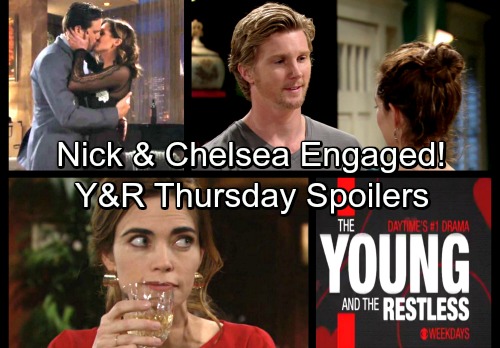 The Young and the Restless (Y&R) spoilers for Thursday, February 15, tease that J.T. (Thad Luckinbell) will finally settle down after his Valentine’s Day outburst. Wednesday’s episode brings a fierce reaction from J.T. He can’t handle it when Victoria (Amelia Heinle) gets distracted with work briefly and shares a dance with Billy (Jason Thompson). It’s clear that J.T.’s got some serious issues.

J.T.’s hot temper comes naturally, but there seems to be more to the story here. Back when Victoria found out about J.T.’s heart problems, she suggested that his meds could be affecting his mood. J.T. brushed off the idea, but there may be some truth to it.

If J.T. has secretly received an even worse diagnosis, that’d be another reason to lash out. It’s possible that his heart condition is more serious than he’s been letting on. J.T.’s doctors may have told him that he doesn’t have long to live.

That could be why J.T.’s rushing his relationship with Victoria and blowing his top so much. He could be having a tough time dealing with his life expectancy. Regardless, it’s easy to see why Mac (Clementine Ford) wanted out of the marriage. If J.T. wasn’t honest with her either, Mac probably thought he was an angry jerk that she needed to cut loose.

The Young and the Restless spoilers say J.T. will apologize to Victoria on Thursday, but she’ll continue to have concerns. Nevertheless, Victoria will have to turn her attention to something else. She won’t want Ashley (Eileen Davidson) to get the upper hand at Newman Enterprises.

Y&R fans can expect Victoria to form a plot. She’ll hope that Jack (Peter Bergman) will do his part since he wants Ashley at Jabot. With any luck, they can both achieve their goals and get their worlds back to normal. Stay tuned to see if Victoria’s scheme will pay off or just cause more Ashley drama.

Other Young and the Restless spoilers say Chelsea (Melissa Claire Egan) will have a surprising request. After making amends with Nick and pointing the finger at Jordan (Darnell Kirkwood) on Wednesday, Chelsea will try to lock down her romance. Thursday’s episode will bring Chelsea’s stunning marriage proposal, which Nick will accept.

Chelsea’s digging quite a hole for herself, so she’d better watch out for the trouble that’s brewing. We’ll give you updates as other Y&R news comes in. Stick with the CBS soap and don’t forget to check CDL often for the latest Young and the Restless spoilers, updates and news.