The Young and the Restless Spoilers: Friday, Jan 19 Update – Mariah Explodes on The Hilary Hour – Victoria Asks J.T. to Move In 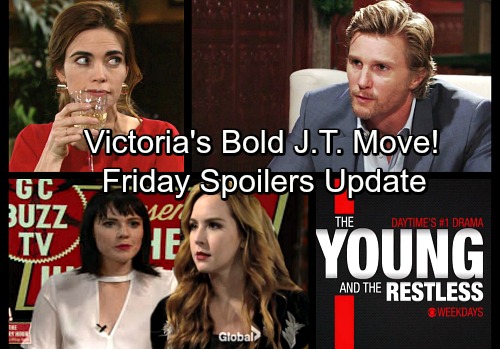 The Young and the Restless (Y&R) spoilers for Friday, January 19, tease that Lily (Christel Khalil) will meet up with Devon (Bryton James). She’ll mention that she officially reunited with Cane (Daniel Goddard), but she’s still battling some fears. Lily will worry about adjusting to life with Sam, but Devon will offer encouragement.

Afterward, Hilary (Mishael Morgan) will bump into Devon and hear that Tessa’s (Cait Fairbanks) got a new song to debut. When Hilary suggests letting Tessa perform on The Hilary Hour, Devon will admit he had other plans. Nevertheless, Hilary will push for it and she’ll ultimately get what she wants.

Devon will fill Tessa in on her upcoming performance, which will spark some anxiety. Since Tessa stole Mariah’s journal and used the entries for lyrics, major drama’s brewing. At the TV studio, Mariah (Camryn Grimes) still won’t have any luck finding her diary. Tessa will sneak it under the table and prepare to belt out her new tune.

Once the show kicks off, Tessa will sing about a lie that feels so true. The Young and the Restless spoilers say Mariah will blow her top. She’ll march over and go off on Tessa big time. Their on-air confrontation is sure to be the talk of the town.

At Lily’s place, Cane will be happy that he’s moving back in. Charlie (Noah Alexander Gerry) will also be tickled pink over his parents’ reunion. Mattie (Lexie Stevenson) will still have some trust issues, but she’ll accept Cane and Lily’s decision. Later, Lily will cradle Sam in her arms and crack a cautious smile.

Other Young and the Restless spoilers say J.T. (Thad Luckinbell) and Victoria (Amelia Heinle) will discuss their renewed romance. Victoria will contend that she doesn’t really like hiding it, but she’ll want to know where they stand before going public. J.T. will think they’re on the right track. He’ll note that he’d like for this to become a serious relationship again.

Fortunately, Y&R spoilers state that Victoria will be on the same page. Since Cane won’t be staying at the Chancellor mansion anymore, J.T. will realize he needs a new place to live as well. When he explains his dilemma to Victoria, she’ll produce a spare key and offer to let J.T. move in.

It sounds like J.T. and Victoria’s relationship is moving right along. They could regret going so fast down the road. We’ll give you updates as other Y&R news comes in. Stick with the CBS soap and don’t forget to check CDL often for the latest Young and the Restless spoilers, updates and news.