BY Heather Hughes on February 28, 2018 | Comments: one comment
Related : Soap Opera, Spoiler, Television, The Young and the Restless 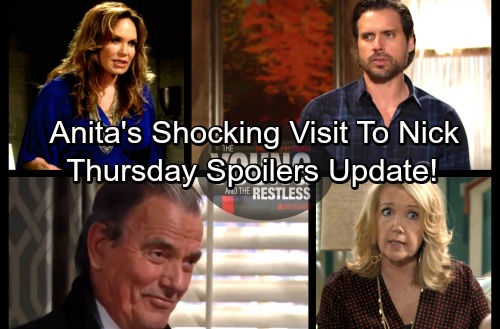 The Young and the Restless (Y&R) spoilers for Thursday, March 1, tease that Victor (Eric Braeden) will pay Nick (Joshua Morrow) a visit. They’ll acknowledge that they both want what’s best for Christian (Jude and Ozzy McGuigen). Victor will promise that he’s going to find Chelsea (Melissa Claire Egan) and Connor (Gunner and Ryder Gadbois), but Nick won’t care about tracking down his ex.

Nevertheless, they’ll reach an agreement about Victor being in Christian’s life. As Victor exits, he’ll gently touch Nick’s shoulder. It’s nice to see a little warmth between this father and son. Meanwhile, Phyllis (Gina Tognoni) will shock Nikki (Melody Thomas Scott) with the news of Victor’s cover-up. She’ll explain that he made Chelsea’s scam backlash go away.

Nikki will confront Victor about it later. She’ll think Victor should’ve filled her in so they could’ve stopped Chelsea from bolting. The Young and the Restless spoilers say Victor will defend his actions. What’s done is done anyway. Victor will vow to locate Chelsea so they can raise Connor themselves. He’ll add that they need to very involved with Christian, too.

At Crimson Lights, J.T. (Thad Luckinbell) will get a phone call from Mac (Kelly Kruger). She’ll rant about Victoria (Amelia Heinle) reaching out to her. Once J.T. hangs up, he’ll meet with Paul (Doug Davidson) to discuss the undercover operation. J.T. will confess that he hasn’t made much progress.

Afterward, Y&R spoilers state that Nick will stop by to see Sharon (Sharon Case). They’ll rehash the DNA results and all the blows Nick’s been dealt. Nick will point out that they need to keep Victor out of the loop on Christian’s paternity.

Phyllis will take her turn with Sharon next. She’ll rant about the pain Nick’s in and add that Sharon’s to blame. Sharon will reiterate that Nick deserved the truth. She’ll plan on offering Nick plenty of support from now on, but Phyllis will scoff at the idea of Sharon being helpful.

Back at the penthouse, Nick will be stunned when Anita (Catherine Bach) shows up. She’ll admit she needs money and add that she received something in the mail. Anita will demand $25,000 for a video file that was sent to her. It’s a message Chelsea wanted Christian to hear.

Nick won’t be interested, but Anita will point out that it’s his last shot at closure. This is Nick’s opportunity to hear Chelsea’s side of the story. Back with J.T., he’ll get caught snooping through Victoria’s stuff. He’ll cover his blunder and eventually get stuck in Victoria’s conflict with Lily (Christel Khalil).

After J.T. takes Lily’s side, she’ll thank him privately. Lily will get updates on all the custody drama and provide some support. Later, Victoria will spot J.T. and Lily sharing a good laugh. She’ll object to J.T. inserting himself into the situation with Lily, but he’ll snap that he can talk to his friends if he wants to.

The Young and the Restless spoilers say J.T. will also bring up the phone call to Mac. He’ll be upset about Victoria disregarding his feelings and butting in his personal issues. It sounds like these two have a lot to sort out. We’ll keep you posted as other Y&R details emerge. Stay tuned to the CBS soap and don’t forget to check CDL often for the latest Young and the Restless spoilers, updates and news.