The Young and the Restless Spoilers: Thursday, May 10 Update – Jack Decides on Another DNA Test – Ravi Confesses to Ashley

BY Heather Hughes on May 9, 2018 | Comments: 2 comments
Related : Soap Opera, Spoiler, Television, The Young and the Restless 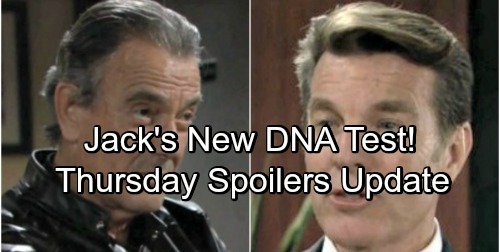 The Young and the Restless (Y&R) spoilers for Thursday, May 10, tease that Jack (Peter Bergman) will be in denial about Dina’s (Marla Adams) revelation. He’ll let Ashley (Eileen Davidson) and Abby (Melissa Ordway) know that he doesn’t buy it. Jack will insist that Dina’s dementia makes her unreliable. He’ll add that the DNA test must’ve been wrong.

Jack will even suggest that Ashley and Abby were just out for revenge. He’ll hint that maybe Ravi (Abhi Sinha) edited the footage as a favor to Ash. Once he stomps off, Ashley will reassure a worried Abby. She’ll note that Jack’s just in a lot of pain right now. Ashley will feel certain that Jack will regret his accusations later.

When talk turns to the altered footage, Abby will wonder who has the most to gain from Jack’s downfall. Later, Ravi will meet up with Ashley for a crucial conversation. He’ll note that Jabot’s buzzing about what happened at the screening. Ravi will confess that he helped Kyle restore the memory card, but never watched what was on it.

The Young and the Restless spoilers say Ashley will be puzzled by the news. She’ll understand why Kyle would target Jack, but the non-Abbott drama affects both of them. Ash won’t get Kyle’s motives here. Afterward, Ashley will return home to fill Abby in on what she’s learned.

Meanwhile, Lily (Christel Khalil) will shoo away a male model who’s flirting with Hilary (Mishael Morgan). Y&R spoilers say Hilary will think Lily’s warming up to the baby idea. Lily will acknowledge that Sam’s going to have a cousin around his age, so that’s good. However, she won’t want Hilary to get too excited. Lily will make it clear that she won’t be throwing a baby shower or anything.

Over with Neil (Kristoff St. John), he’ll talk to Devon (Bryton James) about the screening chaos. Neil will admit that he thinks Victor (Eric Braeden) had a hand in it. Once their chat wraps up, Devon will speak with Simone (Shanica Knowles). He’ll reveal that he’s been thinking about his baby agreement and he intends to honor it.

Simone will want a relationship with Devon anyway, but they’ll ultimately decide to end this. In addition to the breakup, Simone will walk away from Devon’s label. In the Hamilton-Winters office, Abby will discuss the Abbott mayhem with Lily. She’ll confirm what Lily’s been hearing and eventually help out with a casting dilemma.

Lily will be on the hunt for a couple with chemistry, so Abby and Devon will do a little demonstration. When Hilary spots them, she’ll fume over Devon’s apparent vibe with so many women. Hilary will mainly be upset about Devon and Simone’s lunch, but he’ll explain that they’re though. That’ll certainly put a smile on Hilary’s face!

Back with Neil, he’ll see Jack drinking at the athletic club bar. The Young and the Restless spoilers say Neil will have some helpful advice. He’ll think Jack needs to have another DNA test done. It’s the only way he can move forward, so Jack will agree it’s the best plan.

Y&R fans won’t want to miss the twists and turns ahead. We’ll give you updates as other details emerge. Stay tuned to the CBS soap and don’t forget to check CDL often for the latest Young and the Restless spoilers, updates, and news.