The Young and the Restless Spoilers: Wedding Bells for Devon and Hilary – Lily Fumes as Baby Sparks Reunion and Rushed Nuptials

BY Heather Hughes on May 9, 2018 | Comments: one comment
Related : Soap Opera, Spoiler, Television, The Young and the Restless 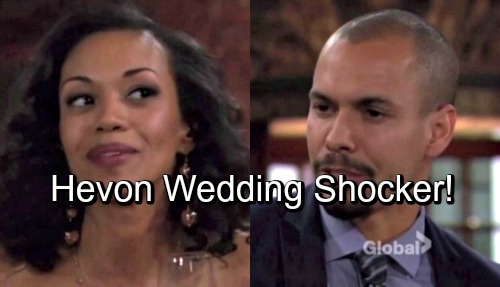 The Young and the Restless (Y&R) spoilers tease that Devon (Bryton James) and Hilary (Mishael Morgan) will hope for the best. Despite Hilary’s deception, Devon forgave her and decided they should move forward with their baby goal. They both want to be parents and now’s the time.

Devon knows how Hilary can be, but he seems to have accepted that. She has flaws like anyone else in Genoa City, but he cares about her and knows she’ll be a great mom. Hilary and Devon are in this together now, so they’ll await big news. There’s a good chance Hilary will indeed be pregnant thanks to her recent insemination.

The Young and the Restless spoilers say Lily (Christel Khalil) will continue to fume over Devon’s decisions. She’ll inevitably find out that Devon had a shot at backing out and blew it. Lily will wonder why in the world Devon would stick with the plan after Hilary tried to deceive him.

Nevertheless, this is Devon’s life and what he does with it is none of Lily’s business. She needs to worry about her own relationship and stop meddling, but we all know she’ll keep at it. It sounds like Devon had better be ready for more Y&R drama.

Lily may have to tolerate Hilary as Devon’s “baby mama,” but she’ll refuse to allow a “Hevon” reunion. She’ll do everything in her power to prevent it. However, Devon and Hilary’s impending bundle of joy will bring them much closer. Will we hear wedding bells soon enough?

The Young and the Restless spoilers say an exciting new chapter’s ahead for Hilary and Devon. They’re kicking off the next phase of their love story, so marriage may be in the works before you know it. Devon and Hilary may decide they want to be a united family instead of co-parents passing a kid around.

Do you hope Hilary and Devon will tie the knot again? Will this baby be exactly what they need to reunite and renew their love? We’ll give you updates as other Y&R details emerge. Stay tuned to the CBS soap and don’t forget to check CDL often for the latest Young and the Restless spoilers, updates, and news.