The Young and the Restless Spoilers: Thursday, May 17 – Jack Desperate For Help After Crash – Devon’s Big Secret

BY Marcy Cohen on May 15, 2018 | Comments: one comment
Related : Soap Opera, Spoiler, Television, The Young and the Restless 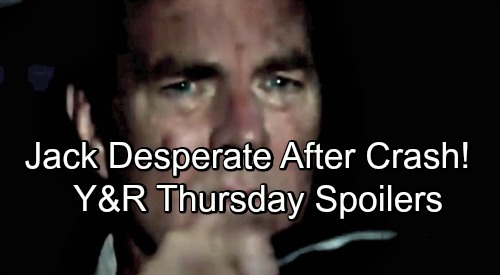 The Young and the Restless (Y&R) spoilers for Thursday, May 17, tease that Jack (Peter Bergman) will desperately need some help. He spins his car off the road and crashes it in Wednesday’s episode. Jack could face consequences for getting behind the wheel after drinking. However, Jack’s health will be the priority. Once his loved ones find out what happened, they’ll just hope that Jack’s OK.

Arturo (Jason Canela) and Abby (Melissa Ordway) might spot the car accident aftermath. Wednesday takes them to the cabin on a mission to find Jack, so things quickly heat up between them. They may make love on Thursday and eventually head back into town. It’d be easy to spot Jack’s vehicle all banged up and smoking.

Whatever the case, let’s hope Jack gets some assistance right away. He needs it in more ways than one! After this ordeal is behind him, Jack can focus on getting a grip. He has to deal with the paternity drama and this isn’t the best strategy. A downward spiral clearly won’t solve anything, so maybe Jack can straighten up and cope soon.

Other Young and the Restless spoilers say Devon (Bryton James) will hide some big news from Hilary (Mishael Morgan). He’ll decide to keep this secret to himself, so that could cause some friction. Hilary won’t like it if she thinks she’s being kept out of the loop. She can usually tell when something’s up, so Devon will have to be careful.

Of course, a secret doesn’t always have to bring doom and gloom. Since Devon and Hilary have been getting along so well, it’s possible he has a pleasant surprise in store for her. Some baby gifts or nursery preparations might work here. Then again, Devon might hide something that could freak Hilary out. He could simply decide not to rock the boat, which would just end up backfiring on him.

No matter what Devon’s hiding, he shouldn’t hurt his chances with Hilary. Y&R’s inching closer to their reunion and one secret won’t be enough to stop it. Over with Victoria (Amelia Heinle), she’ll give Paul (Doug Davidson) her version of the truth. Naturally, that means it won’t be completely accurate. Victoria will spell out what she knows about J.T. (Thad Luckinbell), but she’ll change a few crucial details.