BY Marcy Cohen on May 29, 2018 | Comments: one comment
Related : Soap Opera, Spoiler, Television, The Young and the Restless 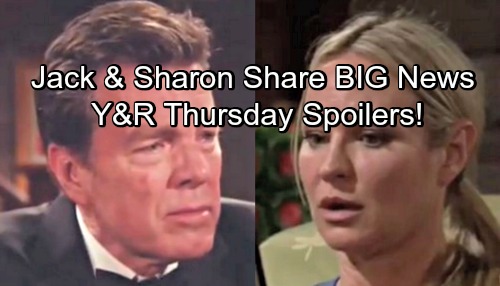 The Young and the Restless (Y&R) spoilers for Thursday, May 31, tease that Jack (Peter Bergman) will open up to Sharon (Sharon Case). He could really use a non-Abbott confidant right now. Jack will explain his paternity problems and suggest that he’s struggling to know who he is anymore. He’ll fill Sharon in on his mission to find a new path for himself, so she’ll offer encouragement.

However, Sharon will need a little encouragement as well. It looks like Nick (Joshua Morrow) may give her updates on some brewing custody drama with Victor (Eric Braeden). Nick may suggest that Sharon was right. Victor hasn’t changed and he never will.

The Young and the Restless spoilers say Nick will intend on fighting Victor in court, but Sharon will undoubtedly be worried about Christian’s (Jude and Ozzy McGuigen) fate. She’d hate to see Nick lose the tot, especially since it’d mean she’d lose him, too.

Now that Sharon and Nick have reunited, she’s taking her place as Christian’s mother figure again. Sharon won’t want everything to fall apart, but Victor will remain determined to get his way. Sharon may share some of concerns with Jack and get comfort in return.

Meanwhile, Abby (Melissa Ordway) will also need someone to lean on. She’ll turn to Arturo (Jason Canela) for support as her family issues heat up. Abby’s actually dealing with double trouble since both the Abbotts and the Newmans are stuck in chaos.

Fortunately, Arturo will glad to console Abby. Their friendship is quickly turning into a hot romance. Y&R fans can expect a passionate kiss soon, so Nikki (Melody Thomas Scot) will confront Abby before the week’s over. Abby and Arturo’s budding relationship will definitely cause plenty of turmoil.

Other Young and the Restless spoilers say Hilary (Mishael Morgan) will give Devon (Bryton James) a shock. She’ll announce that she’s pregnant, but that’s not exactly stunning news. After all, that was the plan! The real surprise could be Hilary’s reaction. Instead of expressing pure joy, Hilary will likely have some fear and anxiety thrown in. Now that this is actually happening, it’s all a bit crazy for Hil.

Thankfully, Devon can offer reassurance and be by Hilary’s side every step of the way. They should be on cloud nine in no time. We’ll keep you posted as other Y&R details emerge. Stay tuned to the CBS soap and don’t forget to check CDL often for the latest Young and the Restless spoilers, updates, and news.