BY Heather Hughes on May 29, 2018 | Comments: one comment
Related : Soap Opera, Spoiler, Television, The Young and the Restless 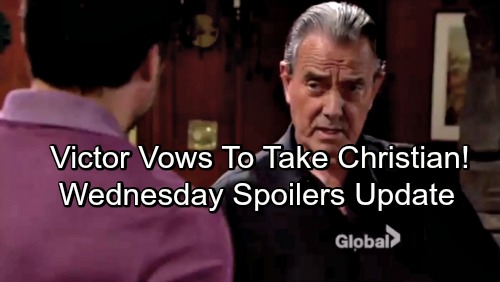 The Young and the Restless (Y&R) spoilers for Wednesday, May 30, tease that Nick (Joshua Morrow) will be appalled over Victor’s (Eric Braeden) dirty move. He’ll think Vic showed his true colors by bringing up Christian’s (Jude and Ozzy McGuigen) paternity. Victor will mention that he kept that secret for quite some time. He’ll point out that he could’ve used it against Nick, but he chose not to.

Nick won’t think that matters since Victor’s using it now. He’ll reiterate that Victor won’t be deciding what Christian’s future looks like. Nick will rant about how his father never changes before stomping off.

At home, Nick will gaze at a picture of Christian and suggest that he’s cutting ties with Grandpa. Suddenly, Victor will arrive to make a bold declaration. He’ll assure Nick that he’s going to be part of his grandson’s life. If Nick tries to stand in the way, Victor will take him to court and get custody.

Victor will remind Nick that Adam (Justin Hartley) is Christian’s biological father. Of course, Nick will think Adam would want the boy out of Victor’s grasp. He’ll add that his own name’s on the birth certificate and suggest that Vic has no chance of winning. Victor will indicate that it’ll soon be in the court’s hands.

Other Young and the Restless spoilers say Jack (Peter Bergman) will sulk at the athletic club. As he sits at the bar, he’ll be confronted by Traci (Beth Maitland) and Kyle (Michael Mealor). They’ll encourage Jack to reconsider his decision to move out. Jack won’t think Kyle’s plea to make amends is genuine. Since there’s so much tension, Traci will ask to speak with Jack alone.

Y&R spoilers say Traci will push Jack to come home for his mother’s sake. Dina (Marla Adams) needs him right now. Traci will also do her best to stand up for Kyle. She’ll just want some family peace, so getting Jack back at the mansion would be a nice start.

However, Jack just won’t be able to grant Traci’s request. He’ll think he needs to learn who really he is and he can’t be anyone except John’s (Jerry Douglas) son in that house. Traci will accept Jack’s choice, but she’ll promise he’s welcome home anytime. They’ll hug as they deal with all the drama.

Later, Devon (Bryton James) will hear that Jack’s going down a new road. He’ll think he can be of some assistance, so maybe a job offer’s headed Jack’s way. Elsewhere, Shauna (Camryn Hamm) will catch Charlie (Noah Alexander Gerry) off guard. She’ll announce that she ran away and needs somewhere to hide.

It’s possible the reality of all this is just overwhelming for Hilary. She could also have fears about complications or just motherhood in general. This is a lot for Hilary to take in, so she’ll need a moment to process everything. We’ll give you updates as other Young and the Restless news comes in. Stick with Y&R and don’t forget to check CDL often for the latest Young and the Restless spoilers, updates, and news.