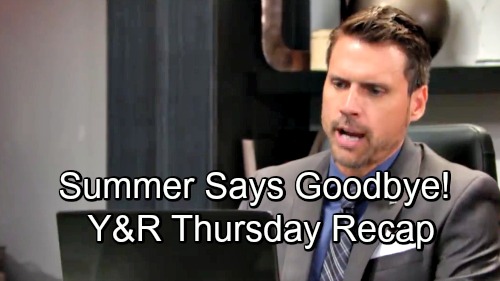 The Young and the Restless (Y&R) spoilers update and recap for Thursday, November 29, tease that Summer (Hunter King) will stand her ground. She’ll shut down Phyllis’ (Gina Tognoni) attempts to talk her out of her latest job opportunity. Meanwhile, Nick (Joshua Morrow) will blast Victor (Eric Braeden) via video chat. Victor will list all the reasons this is a good idea before he hangs up and awaits Summer’s arrival.

Abby (Melissa Ordway) will drop by Nick’s office and mention the business deal she’s working on. He’ll praise her for taking the lead on this. Back with Phyllis, she’ll push Summer to admit why she’s really leaving. Phyllis will worry that this is about Billy (Jason Thompson) or perhaps her own relationship with Summer.

Fortunately, Y&R spoilers say Summer will reassure her mom. She’ll insist that this is a personal choice. Summer will add that she knows what she’s doing when it comes to Victor. Nick will join Phyllis and Summer for a conversation later. He’ll present an alternative by suggesting that Summer could come to work at Dark Horse. Despite Nick’s generous offer, Summer won’t waver on her decision.

Once they’re forced to surrender, Phyllis and Nick will wish their daughter good luck on her big adventure. They’ll embrace Summer and bid her farewell. Summer will also share an emotional goodbye with Kyle on Thursday. She’ll wish things could’ve been different, but Kyle will feel like there’s so much out there for her. Summer will kiss her former flame on the cheek before she heads out.

Other Young and the Restless spoilers say Kyle will meet with Lola (Sasha Calle). He’ll confess that he needed some time to wrap his head around her virginity. Kyle will note that he knows where they stand and he’s OK with it. He won’t want to give up the good thing they’ve got going. Kyle and Lola will lock lips as they get on the same page.

At Crimson Lights, Mia (Noemi Gonzalez) will offer her gratitude to Sharon (Sharon Case) for the night out at Top of the Tower. She’ll get a recommendation for putting together a candlelight dinner for Rey (Jordi Vilasuso) and take off. Mariah (Camryn Grimes) will feel like Sharon’s a saint for handling this so delicately. Sharon will want to help Rey, but she’ll think his marital issues are worse than he thinks.

At the athletic club, Mia will push Arturo’s (Jason Canela) buttons about Abby. She always finds ways to stir the pot! Mia won’t think their relationship is all that serious, but Arturo will insist that what they have is very real. He’ll advise Mia to butt out and work on her marriage instead.

Over with Ana (Loren Lott), she’ll catch Devon (Bryton James) drinking with some musician buddies. When Ana expresses concern, Devon will lash out. He’ll feel like Ana only came because she was recruited to help him.

After Ana fills Nate (Brooks Darnell) in, he’ll confront Devon about trying to self-medicate. Devon will insist that Nate just wants him there crying on his shoulder. He’ll argue that he’d rather move on. The Young and the Restless spoilers say Devon needs more help than he’s willing to admit!

It sounds like some great drama’s ahead in Genoa City. We’ll give you updates as other Y&R news comes in. Stay tuned to the CBS soap and don’t forget to check CDL often for the latest Young and the Restless spoilers, updates, and news.