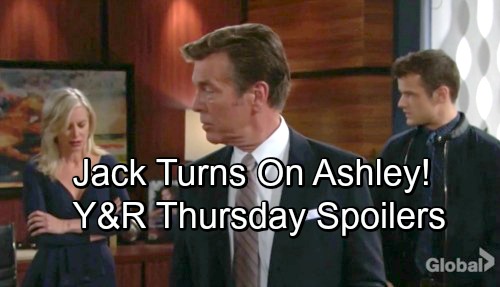 The Young and the Restless (Y&R) spoilers for Thursday, October 11, tease that Jack (Peter Bergman) will be put to the test. He cares about his sister and wants her to succeed, so he’ll be hesitant to help drag Ashley (Eileen Davidson) down. However, Kyle (Michael Mealor) will push Jack’s loyalty to the limit. He’ll suspect that Ashley’s been up to no good, so he won’t think they should leave this alone.

Of course, Andrew (Coby Ryan McLaughlin) will be the reason for Kyle’s growing suspicions. Kyle already felt like Ashley’s dirty moves would come back to haunt her. Thanks to Andrew’s comments on Wednesday, Kyle will be even more convinced that. He’ll push Jack to investigate this with him on Thursday, so Jack may cave in.

Regardless, Jack and Kyle will confront Ashley by the end of the week. Even if Kyle has to find out what’s up on his own, he’ll inevitably share what he learns with Jack. Andrew runs the DNA lab at Genoa City Memorial, so that’ll come into play before long. It seems Ashley turned to Andrew for help with paternity test tampering. She’ll have to pay the price for that in the near future.

In the meantime, Victoria (Amelia Heinle) will take charge of a heated situation. Once the cover-up crew members come together with their cryptic notes, they’ll wonder what to do next. Naturally, Sharon (Sharon Case) and Phyllis (Gina Tognoni) will get into a shouting match. It’s not a great idea to have them in same room together right now, but they’ll be forced to stay in each other’s orbit.

Nikki (Melody Thomas Scott) will try to settle everyone down, but Victoria will ultimately be the one who achieves temporary peace. Unfortunately, Y&R fans won’t see much peace during Cane’s (Daniel Goddard) visit with Lily (Christel Khalil) – at least not at first. When Cane arrives, he’ll realize Lily’s adjusted to life behind bars in a negative way. Lily’s harsh persona will leave Cane with major concerns.

After Cane objects, Lily will lash out at him. Her new prison personality will be the only thing keeping her safe in there. The Young and the Restless spoilers say Cane will eventually ease up on Lily. She’s doing the best she can, so Cane will promise that he’s got her back. Even when they’re apart, they’re going to be in this together.