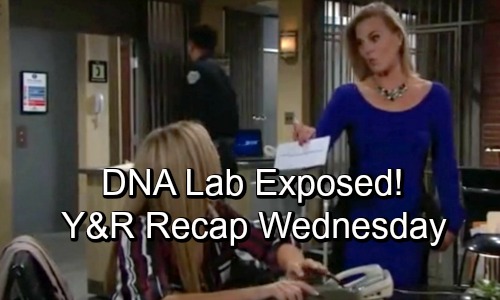 The Young and the Restless (Y&R) spoilers update and recap for Wednesday, October 10, tease that Kyle (Michael Mealor) will voice his complaints. During a chat with Jack (Peter Bergman), Kyle will gripe about how Ashley (Eileen Davidson) stabbed him in the back. He’ll argue that she’s going to get what’s coming to her soon enough.

Meanwhile, Ashley will spar with Andrew (Coby Ryan McLaughlin). She’ll insist that he’s trying to blackmail her, but he won’t see it that way. Andrew will just want an arrangement that works out well for both of them. He’ll finally infuriate Ashley enough to get thrown out of her office.

Noah (Robert Adamson) will waltz over and catch the end of their confrontation. He’ll think Nick should just move toward a friendship with Sharon (Sharon Case), but his dad will refuse. The Young and the Restless spoilers say Nick won’t be willing to give up on their love story.

At the police station, Rey (Jordi Vilasuso) will wonder if Sharon would like to have dinner at his place. She’ll mistakenly assume it’s a date, so she’ll quickly decline. After all, Sharon just broke up with her fiancé mere days ago! Fortunately, Rey doesn’t work that fast. He’ll explain that Lola (Sasha Calle) will be there, so Sharon could probably help keep the peace.

Once Sharon’s on board, she’ll be left alone as Phyllis appears. Y&R spoilers say Phyllis will pull out the letter and suggest that Sharon’s gone too far. Sharon will assure Phyllis that she’s not the sender. They’ll argue as Rey returns, but they’ll suggest they’re still feuding over wedding drama.

At Crimson Lights, Summer will spot Lola and saunter over for an introduction. It won’t be long until Summer dishes out an insult or two. Once Lola’s sufficiently irked, she’ll nearly hurl a coffee pot at Summer. Thankfully, Tessa (Cait Fairbanks) will be there to settle Lola down. The barista will also fill Kyle in on the chaos a little later.

The Young and the Restless spoilers say Kyle will take pleasure in Summer’s jealousy. However, she’ll contend that she’s got a new man in her life. Kyle will struggle to believe Summer’s claims about Billy (Jason Thompson), but she’ll insist that they spent the night together. Before Kyle exits, he’ll mock Summer for thinking that constitutes some epic love saga.

Afterward, Sharon will show up for Rey and Lola’s mini dinner party. She’ll bring a lucky plant as a gift before enjoying some Cuban food. When it’s time for dessert, Rey will start a whipped cream war with his sis. Sharon will get caught in the sticky crossfire, so she’ll be a mess when Nick arrives. He’ll think she should hear him out, but Sharon will just send him right back where he came from.

Once Sharon returns, Rey will help her get cleaned up. Lola will definitely pick up on a vibe between them. In a moment alone, Lola will offer a reminder to her big bro. Rey’s technically still married, so Lola will want to make sure he remembers that.

Back at the coffeehouse, Noah will bump into Tessa and let her know they’re all good. She’ll apologize for her mistakes, but Noah will just want her to treat Mariah right. Back with Sharon, she’ll get the same spooky note as the rest of the cover-up crew.

Over with Andrew, he’ll approach Kyle and mention that he has damaging evidence. He’ll suggest that it could negatively affect Jabot, so Kyle would be wise to get Ashley with the program. Kyle will reconvene with Jack later and provide updates on eerie meeting. He’ll plan to get to the bottom of what Andrew’s hiding.

Finally, Phyllis will spot Andrew and recognize him from decades ago. He’ll mention that he’s in charge of the hospital’s DNA lab, so he obviously had a hand in Jack’s paternity tests. Y&R spoilers say Ashley’s headed for trouble, so we’ll keep you posted as other details emerge. Stick with the CBS soap and don’t forget to check CDL often for the latest Young and the Restless spoilers, updates and news.