The Young and the Restless Spoilers: Thursday, September 13 – Devon Visits Lily – Tessa’s Life In Danger – Rey on the Hot Seat 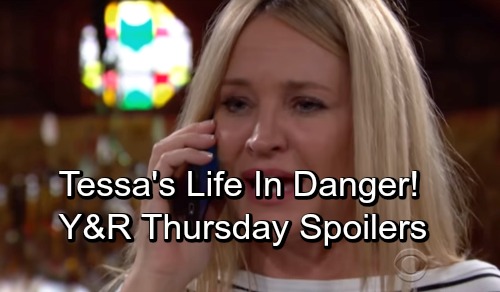 The Young and the Restless (Y&R) spoilers for Thursday, September 13, tease that Devon (Bryton James) will make a significant choice. Charlie (Noah Alexander Gerry) recently pushed Devon to pay Lily (Christel Khalil) a visit behind bars, which Devon was reluctant to do. The wounds are still fresh, so he’s just not sure he’s ready to face Lily just yet.

Nevertheless, Devon wants Charlie to get back in school and focus on the future. He also doesn’t want to let Charlie down, so he’ll decide to stop by Walworth and get this over with. Deep down, Devon probably want to see Lily and clear the air anyway. He truly loves her, but they’ve got some issues to discuss.

Y&R spoilers say Devon’s visit will bring plenty of tears and pain. Lily will once again express remorse for causing the deaths of Hilary (Mishael Morgan) and her unborn baby. She’ll assure Devon that her suffering is nothing compared to what he’s going through.

Lily would stay behind bars for the rest of her life if it would turn back the clock and undo her mistakes. Unfortunately, that’s not an option. All Lily can do is serve her one-year sentence and hope Devon finds a way to forgive her. It appears he’ll inch awfully close to that step in Thursday’s new Y&R episode.

Lily will wonder if Devon can really get past this, so he may admit he’s trying. They’ll share some emotional moments as they struggle to cope. In the meantime, Sharon (Sharon Case) will get some shocking news. Tessa (Cait Fairbanks) will burst in the coffeehouse looking like she’s just seen a ghost. She’ll show Sharon the bruises on her arm and stammer that the smugglers want their money NOW.

Sharon will be concerned, especially when Tessa goes missing. A phone call will come in from her new barista later, but it won’t bring positive updates. The Young and the Restless spoilers say extreme danger is brewing. A scream on the other end of the line will leave Sharon filled with fear. She’ll call out Tessa’s name, but it seems the call will be dropped.

While Mariah’s (Camryn Grimes) worst nightmare begins, Rey (Jordi Vilasuso) will try to clean up his mess. He was wrong about Nick’s (Joshua Morrow) involvement with J.T. (Thad Luckinbill). Y&R fans know Nick was impersonating the sleazy Hellstrom, not working with him. Paul (Doug Davidson) won’t be pleased that Rey arrested Nick on the wrong charges, especially at a public gathering.

Rey may offer an apology for that, but he’ll at least think they’re getting closer to the truth. Will Rey close in on the cover-up crew soon? We’ll keep you posted as other Young and the Restless details emerge. Stick with the CBS soap and don’t forget to check CDL often for the latest Young and the Restless spoilers, updates, and news.