BY Heather Hughes on October 2, 2018 | Comments: one comment
Related : Soap Opera, Spoiler, Television, The Young and the Restless 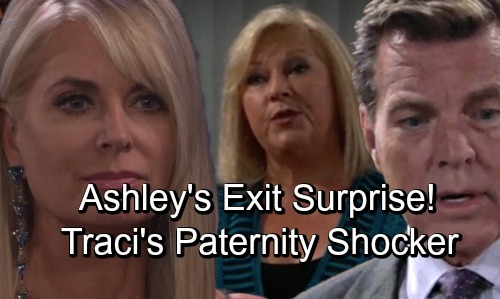 The Young and the Restless (Y&R) spoilers tease that fans will see a new side of Traci (Beth Maitland) in the coming weeks. Ashley (Eileen Davidson) undoubtedly thought she could stick Traci in the CEO spot and start pulling the strings. She’s hoping to take over for her sister ASAP, but Traci may have other ideas soon. A lot can happen now that Traci’s accepting that top spot.

In Tuesday’s episode, Traci suggests she won’t be anybody’s puppet. Good for Traci! She shouldn’t let the power-hungry Abbotts run all over her. Of course, Traci could turn into one of those power-hungry Abbotts herself. The Jabot throne tends to bring out the worst in these family members.

Nevertheless, Traci will plan to give her all. She’ll devote herself to this job for however long she may be in it. In a recent issue of Soap Opera Digest, Beth Maitland weighed in on her character’s new path. She called it “such a defining moment” and argued that Traci was smart enough to handle the position. Traci may be out of her element, she’s still got some qualities that make her a great CEO.

“She may not be cutthroat or business savvy, but Traci has the grit and determination to do what’s right,” Maitland said. She added that Traci would be able to “level the playing field.” As for the rest of the Abbott clan, Traci can see that they all have their own agendas. She’s not oblivious to the power struggle that’s going on.

Maitland called Traci an observer who’s very bright. She wants to see the best in people, but she still knows what’s up! “I’m sure none of the motives flying around are lost on her,” Maitland said. In light of those motives, Traci may be reluctant to give up the CEO spot. As time goes on, she may think she’s the best person for the job.

This could be about protecting John’s (Jerry Douglas) legacy, not competing with each other. If Traci’s the only one who understands that, then she should indeed remain on the throne. However, some major Young and the Restless twists are brewing. Some of those bombshells could affect Traci in a big way.

During the week of October 8-12, Jack will make a stunning discovery. Could he somehow learn he’s an Abbott after all? If so, that opens the door to a paternity change for Traci. Y&R fans will recall that Traci’s hair sample was used for the first DNA test. Jack wasn’t a full match for her, but maybe that’s because Traci’s the one who isn’t a blood Abbott.

As for the second DNA test, Ashley (Eileen Davidson) could’ve tampered with the results. She’s proven that she’ll go to great lengths for power. The Young and the Restless spoilers state that Ashley’s exit story is coming up. This shameful act could play a role in her departure drama.

Whatever the case, next week will jumpstart some serious mayhem for the Abbott family. We’ll give you updates as other Y&R news comes in. Stay tuned to the CBS soap and don’t forget to check CDL often for the latest Young and the Restless spoilers, updates, and news.