BY Marcy Cohen on October 2, 2018 | Comments: one comment
Related : Soap Opera, Spoiler, Television, The Young and the Restless 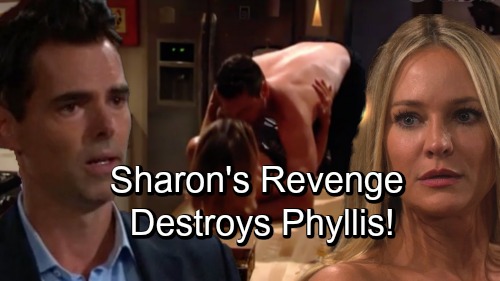 The Young and the Restless (Y&R) spoilers tease that Sharon (Sharon Case) will deal with plenty of pain and regrets. In Tuesday’s episode, Mariah (Camryn Grimes) comes clean about Nick (Joshua Morrow) and Phyllis’ (Gina Tognoni) sex session. Sharon will struggle with this info in the coming episodes, but at least she she’s in the loop. She deserves to have all the facts before she says “I do.”

Sharon will inevitably feel like history’s repeating itself. At the first sign of trouble, Nick went running to Phyllis. Everyone keeps suggesting that Nick and Sharon were on a break, but that’s not exactly true. It’s not like Sharon called the whole thing off.

After Nick found the engagement ring, he should’ve tracked Sharon down and pressed for answers about where they stood. Instead, Nick basically used it as an excuse to cheat. That’ll be something Sharon has to consider as she makes her choice.

Of course, Sharon’s own secret will complicate the situation. She’ll undoubtedly feel a bit guilty since she’s hiding some J.T. (Thad Luckinbill) bombshells. Once Phyllis realizes what’s up, she’ll surely start to sweat. Sharon could blow her life up in more ways than one!

Fortunately, Nick will probably keep his mouth if he finds out what happened to J.T. The man was ready to attack his sister! Nikki (Melody Thomas Scott) had every right to defend Victoria (Amelia Heinle) from the monster J.T. had become. The cover-up was a mistake, but Nick wouldn’t want any of them to land behind bars.

However, Phyllis could pay the price for the one-night stand. She was legitimately on a break with Billy, but he’d still be livid that she kept this from him. Even if Sharon stays tight-lipped about the J.T. details, she could divulge the sex secret to Billy. If Sharon can’t have her happy ending, why should Phyllis?

To further complicate the situation, Billy’s life has turned into a nightmare. He’s asking Phyllis to put up with a lot, but will he return the favor? The hookup drama could definitely serve as another “Philly” obstacle. The Young and the Restless spoilers say their relationship could be hanging by a thread soon enough.

Y&R fans know Jack’s (Peter Bergman) waiting in the wings, so he’d likely be pleased by the drama. It’d give him a chance to make his big move! It sounds like Young and the Restless has some shakeups in store. The mayhem could start when Sharon seeks revenge for Phyllis’ side of this betrayal.

Are you anxious to see where the story goes from here? We’ll give you updates as other Y&R news comes in. Stay tuned to the CBS soap and don’t forget to check CDL often for the latest Young and the Restless spoilers, updates and news.