BY Heather Hughes on October 1, 2018 | Comments: one comment
Related : Soap Opera, Spoiler, Television, The Young and the Restless 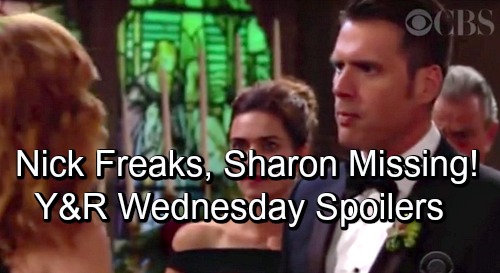 The Young and the Restless (Y&R) spoilers for Wednesday, October 3, tease that Nick (Joshua Morrow) will be on cloud nine. He’ll feel like his life’s coming together as he prepares to wed Sharon (Sharon Case) and move in their new house. Unfortunately, “Shick’s” future is about to be derailed!

Before the ceremony, Nick will have a chat with Jack (Peter Bergman). He’ll open up about his dreams and count on this wedding going exactly as planned. Of course, Nick won’t know what’s going on across town. In Tuesday’s episode, Mariah (Camryn Grimes) reveals Nick and Phyllis’ (Gina Tognoni) sex secret. That means Sharon will have a lot to mull over on Wednesday.

The Young and the Restless spoilers say Sharon will request some time and space. She’ll undoubtedly have her own secret on her mind. Sharon still hasn’t revealed the truth about J.T.’s (Thad Luckinbill) disappearance. Nick has no idea that Nikki (Melody Thomas Scott) killed the abuser and Sharon helped cover it up.

Is Sharon a hypocrite if she holds Nick’s secret against him? She may worry about that. Of course, you could also argue that the circumstances are entirely different. Nick’s secret is the only one that involves a romantic betrayal. Sharon may decide that’s all that matters as the nuptials draw near.

Y&R spoilers say Nick will remain excited as the guests arrive. He’ll look forward to making Sharon his wife in front of his loved ones. When the wedding countdown ends, Nick will start to get nervous. Sharon will suddenly be MIA, so Nick will worry that she’s gotten cold feet.

Mariah will definitely fear the worst as well. She’ll realize she may have blown up Sharon and Nick’s shot at happiness, but what else could she do? Mariah couldn’t deceive Sharon about this forever. Soap characters just aren’t that good at keeping secrets, especially when it hurts someone they care about.

As time keeps ticking by, Nick will confront Mariah about Sharon’s whereabouts. Will she break down and share what happened? The Young and the Restless fans will be anxious to see how it all plays out. Sharon will have to make a decision about Nick sooner or later. If she ultimately delivers her choice at the wedding, that could bring even more drama.