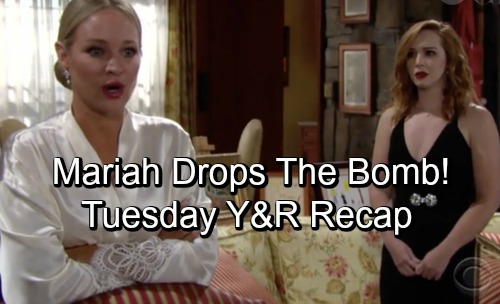 The Young and the Restless (Y&R) spoilers update and recap for Tuesday, October 2, tease that Billy (Jason Thompson) will be crushed as his family turns against him. Traci (Beth Maitland) will insist that in light of the company theft, she’s willing to take over as Jabot’s CEO. Billy will rant at Ashley (Eileen Davidson) for seeking someone she can control. He’ll eventually storm out and leave the others to make their choice.

The no-confidence vote will end with Billy being ousted, so Traci will take the throne. Kyle (Michael Mealor) will be quite pleased by the outcome of all this. Ashley will feel like Kyle’s being heartless, but he won’t have the same perspective. Kyle will point out that Ash’s qualifications make her the best CEO candidate, but she should watch her back. Y&R fans know Kyle’s both determined and sneaky!

Meanwhile, Jack (Peter Bergman) will catch up with Billy and Phyllis (Gina Tognoni). He won’t be pleased about the theft bombshell. When Jack agreed to bail Billy out, he didn’t have all the facts. Phyllis will explain that she was just trying to keep the matter under wraps and help Billy keep his job.

Once they’ve hashed things out, Jack will push Billy to stick with his rehab plan. Phyllis will echo the idea, but that’ll prompt concerns for Billy. He’ll feel like Jack and Phyllis are teaming up, but Phyllis will insist that they both want what’s best for him.

Back with Traci, she’ll want to look through all the paperwork before she signs anything. Traci will make it clear that she’s not a pawn here. Ashley will understand that, but she’ll also have some fears about their plan. Traci will promise she’s going to step down as soon as she can, but Ashley may have her doubts. She’ll suggest that it’s easy for power to go to someone’s head.

At Crimson Lights, Summer (currently played by Bayley Corman) will interrogate Mariah (Camryn Grimes). She’ll want to know if the hookup secret’s been spilled yet. Mariah will lash out over Summer’s intentions and remind her of all the people who would get hurt. Summer will simply note that the wedding’s rapidly approaching, so Mariah had better decide what to do.

Nearby, Lola (Sasha Calle) will assist Rey (Jordi Vilasuso) with his big move. She’ll pitch in with some boxes he’s taking to his new apartment upstairs. Lola will convince Arturo (Jason Canela) to help a bit, too. She’ll be thrilled that they’re making some progress in their relationship.

Unfortunately, Lola and Kyle will take a step back. He’ll waltz over with news about a potential promotion, so she’ll pipe up about her own excellent day. When Kyle wants to go out and celebrate, Lola will decline. Kyle won’t be interested in rescheduling, so it seems these two will struggle to get on the same page.

Other Y&R spoilers say Mariah will eavesdrop on Nick’s (Joshua Morrow) chat with Christian (Jude and Ozzy McGuigen). He’ll talk about the wonderful things that are in store for their family. Afterward, Mariah will bring up some of Nick’s past romances. She’ll wonder if he has any unfinished business with those women, but he’ll promise he’s completely committed to Sharon (Sharon Case).

Next, Faith (Alyvia Alyn Lind) will open up to Mariah. She’ll admit she’s still a bit anxious about Sharon and Nick’s nuptials. Faith will feel like it’s important to be certain when you’re marrying someone. The conversation will convince Mariah to come clean, so she’ll gather up her courage later.

The Young and the Restless spoilers say Mariah will make an emotional confession. During a private moment with Sharon, she’ll reveal that Nick and Phyllis slept together. Mariah will hate to dump this on Sharon right before the wedding, but she’ll feel like she had no choice.