The Young and the Restless Spoilers: Tuesday, April 17 – J.T.’s Body Buried – Neil’s Back – Hilary Won’t Give Up

The Young and the Restless (Y&R) spoilers for Tuesday, April 17, tease that a secret plan will be set in motion. In Monday’s Y&R episode, Nikki’s (Melody Thomas Scott) horrified to learn the blow she struck killed J.T. (Thad Luckinbell). Phyllis (Gina Tognoni) doesn’t want to risk going to the cops, so they decide to dispose of the body and put this behind them.

On Tuesday, the ladies will pull off the first step of their mission. The Young and the Restless spoilers say Sharon (Sharon Case), Victoria, Phyllis and Nikki will take J.T.’s corpse to an undisclosed location. They’ll hope to dump him and get out of there as quick as they can.

Phyllis will keep reminding the others that their strategy is the right one. She’ll insist that they need to take care of this and be done with it. Once the body’s buried, they’ll just try to go about their business and pretend they had nothing to do with J.T.’s disappearance.

There’s a good chance Phyllis’ brilliant plan won’t turn out to be so brilliant in the end. They’re bound to get caught eventually. Paul (Doug Davidson) will be determined to track down Victor’s (Eric Braeden) attempted murderer. Thanks to Victor’s info as well as crime-scene blood confirmation, Paul will want to arrest J.T. as soon as possible. He’ll rev up his search efforts later this week. 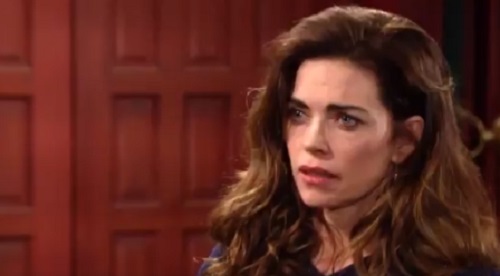 Other Young and the Restless spoilers say Neil (Kristoff St. John) will make it back to town. He’ll be glad to see his loved ones, but it won’t take long to get caught in drama again. Neil should be stunned when he hears about the deal Devon (Bryton James) and Hilary (Mishael Morgan) made. Devon called it off, but he shouldn’t get too confident about a Hilary-free future. She may already be pregnant!

Regardless, Hilary will still think she has a shot at winning Devon over. She’ll do whatever she can to make this reunion happen, but Y&R fans can definitely expect some obstacles. We’ll give you updates as other news comes in. Stay tuned to the CBS soap and don’t forget to check CDL often for the latest Young and the Restless spoilers, updates and news.