BY Heather Hughes on August 13, 2018 | Comments: one comment
Related : Soap Opera, Spoiler, Television, The Young and the Restless 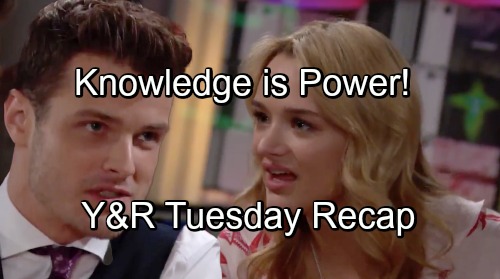 The Young and the Restless (Y&R) spoilers for Tuesday, August 14, tease that Nate (Brooks Darnell) will make Victoria (Amelia Heinle) nervous. At The Dive Bar, Nikki (Melody Thomas Scott) will step away while Nate moseys over to Victoria. He’ll start chatting her up and suggest maybe she could show him around town.

Victoria will contend that she’s pretty busy these days. Soon after, Nikki will explain that Nate’s helping with Victor’s (Eric Braeden) recovery. Nate will add that he’s taking care of Nikki as well. He’ll hope he can pinpoint the exact cause of all her stress lately.

Once Nate’s gone, Victoria will fret about Nate digging too deep. The Young and the Restless spoilers say Nikki won’t be worried. She’ll feel like Nate won’t be tough to handle, but Victoria will still seem concerned. When Victor appears, he’ll be puzzled by Victoria’s doubts about the doc.

Later, Victor will surprise Nikki with a couples’ massage and a special dinner. He’ll hope he can reduce her stress and rev up their romance. Meanwhile, Lily (Christel Khalil) will lash out over Cane’s (Daniel Goddard) crazy getaway plan. She’ll imply that Cane keeps making things worse for her.

Cane should’ve told Lily about the red light from the beginning, but he chose to keep it a secret. Now he’s trying to pile on the charges with this illegal scheme. Lily will argue that she has to face the consequences. She’ll ultimately stomp off and urge Cane not to follow her.

Meanwhile, Charlie (Noah Alexander Gerry) and Mattie (Lexie Stevenson) will mull over this terrible situation. Y&R spoilers say Charlie will want to talk Devon (Bryton James) into showing Lily mercy. He’ll think it’s the only way to get Lily off the hook. Mattie won’t be completely on board, but she’ll promise to support Charlie’s strategy.

Afterward, Charlie and Mattie will fill Nate in on what they’re about to do. Nate will approve and hope it works out, but he’ll also offer a warning. Devon’s still upset, so they can’t count on this plan to work. Still, Nate will encourage Mattie and Charlie to fight for their mom no matter what.

Back with Victoria, she’ll encounter Nate again. He’ll start talking about the strain Nikki’s facing and how Victoria seems to be dealing with a lot, too. Victoria will suggest that Nate doesn’t need to poke his nose where it doesn’t belong, but you can bet he will anyway!

Other Young and the Restless spoilers say Mariah (Camryn Grimes) will run into Kyle (Michael Mealor) and Summer (Hunter King). Naturally, Summer and Mariah will spar as usual. Kyle will do his best to play peacemaker, but Mariah will ultimately take off.

After a little more bickering of their own, Kyle and Summer will discuss the recent “Shick” drama. They’ll manage to put the clues together and determine that Phyllis (Gina Tognoni) hooked up with Nick (Joshua Morrow). Summer will certainly exploit this bombshell soon, so stay tuned.

Y&R has some exciting scenes in store for us. We’ll give you updates as other news comes in. Stick with the CBS soap and don’t forget to check CDL often for the latest Young and the Restless spoilers, updates, and news.