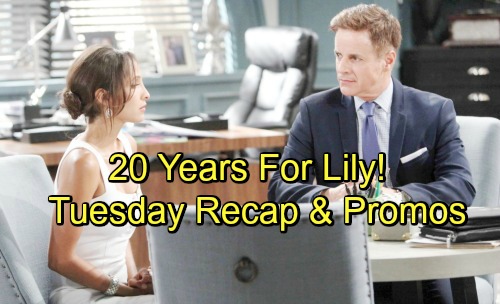 The Young and the Restless (Y&R) spoilers and recap for Tuesday, August 7, tease that Ashley (Eileen Davidson) will pop in Neil’s (Kristoff St. John) place to provide some comfort. He’ll admit that his family’s stuck in turmoil right now. After Neil recaps Lily’s (Christel Khalil) involvement in the crash, Ashley will see just how bad the situation is. She’ll offer her support and kiss Neil before she exits.

At home, Cane (Daniel Goddard) will try to talk Lily out of confessing. He’ll feel like silence is the best option, but Lily won’t agree. She’ll insist that she’s turning herself in whether Cane’s by her side or not. Afterward, Lily will fill Neil and the twins in on her plan. Charlie (Noah Alexander Gerry) and Neil won’t think it’s a good idea, but Mattie (Lexie Stevenson) will feel like her mom’s doing what’s right.

Michael will arrive soon after to advise Lily. He’ll let her know that her story lines up with the truck driver’s. Michael will note that Paul’s coming over to Hamilton-Winters for answers, so it’s best to keep things simple. He won’t want Lily to blab too much and make matters worse.

Once Paul shows up, Lily will admit to running the red light. She’ll also bring up the death of Hilary’s unborn child, which will leave Michael nervous. He’ll interrupt Lily a couple times and attempt to keep her on track. Paul won’t be happy that Lily kept her mouth shut for so long, but at least the truth is coming out now.

After Lily’s said all she has to say, she’ll crumble in Cane’s arms. Meanwhile, Paul will confer with Christine (Lauralee Bell) and reconvene with Lily. He’ll suggest that he’ll have news on what’s next soon. When they’re alone, Michael will blast Lily for spilling too much in her recorded confession. He’ll warn that she could get 20 years in prison for two counts of vehicular homicide.

At Jabot, Jack (Peter Bergman) will gripe about Billy (Jason Thompson). He’ll talk to Ashley (Eileen Davidson) about Hilary’s (Mishael Morgan) death and how Phyllis needed support. Jack won’t be satisfied with how Billy treated her. He’ll add that Billy’s gambling again, so Ash will want to figure out exactly how company funds have been used.

Over with Summer (Hunter King), she’ll decide to swipe Phyllis’ phone and determine who she’s been in touch with. Summer will be looking for evidence of Phyllis’ one-night stand mystery man. She’ll manage to get her hands on her mom’s phone briefly, so she’ll take a picture of her recent calls.

Afterward, Summer will meet up with Jack for a chat. They’ll discuss the “Philly” reunion, but Summer will think Jack was the better match for her mother. Jack will confess that he hasn’t been able to let Phyllis go. He’ll admit he’s still in love with his ex, so Summer will encourage Jack to keep trying.

The Young and the Restless spoilers state that Summer will draw the wrong conclusion. She’ll guess that Jack was the other half of that hookup and fill Kyle in on her suspicions. Back with Jack, he’ll scold Phyllis for taking Billy back. She’ll suggest that she’s drawn to the excitement Billy brings to her life.

Y&R fans will also see a battle between Ashley and Billy on Tuesday. They’ll spar over Billy’s gambling and the risky project he’s been cooking up. The Young and the Restless spoilers say Billy will push Ash to trust him. Naturally, that won’t be an easy task!

Billy had better be careful now that Ashley’s returned to town. She’s bound to throw him a few corporate curveballs! We’ll give you updates as other Y&R details emerge. Stay tuned to the CBS soap and don’t forget to check CDL often for the latest Young and the Restless spoilers, updates, and news.