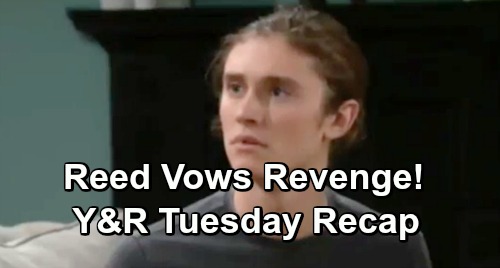 The Young and the Restless (Y&R) spoilers update and recap for Tuesday, December 11, tease that Nikki (Melody Thomas Scott) will show up at Victoria’s (Amelia Heinle) house and fill her in on her latest discovery. After they examine J.T.’s (Thad Luckinbill) old clothes, they’ll discuss how this could’ve happened. Victoria will think it had to be someone close to the situation since he or she got past security.

Soon after, Reed (Tristan Lake Leabu) will catch them off guard. He’ll announce that he’s going to get answers about J.T.’s death during his holiday break. While Victoria helps Reed get settled in, Nikki will sneak some sips from Victoria’s glass of wine.

The next morning, Reed will get updates on J.T.’s missing body. He’ll think his dad might still be alive, but Nikki and Victoria won’t want him to get his hopes up. They’ll note that the cops believe someone moved it, so an appalled Reed will wonder about the culprit.

At the Abbott mansion, Jack (Peter Bergman) will find out Billy’s (Jason Thompson) reunion plan didn’t pan out. Billy will think Phyllis (Gina Tognoni) just needs a little longer to come around, but Jack will disagree. He’ll encourage Billy to move on and let Phyllis live her life. Billy will mention Jack’s interest in Kerry (Alice Hunter) and hope he keeps up his pursuit.

At Dark Horse, Abby (Melissa Ordway) will make a business pitch. She’ll think Genoa City needs a cool place for its younger residents to hang out. Everything closes up early in GC, so there’s just no late-night scene. Abby will push the idea of a new bar to Nick, but he’ll think it sounds risky. He won’t have time to help Abby with it, so she’ll need to get a plan together on her own.

Abby will gripe about Nick’s reaction to Arturo (Jason Canela), who’ll contend that there could be other uses for the building. However, Abby will stick to her guns on this. She’ll believe in the project, so she’ll plan on getting some assistance from Devon (Bryton James).

Back with Nick, he’ll drop by Victoria’s place and bring up Victor’s (Eric Braeden) disappearance. Reed will be concerned when he hears his grandpa’s missing, but Victoria will downplay the seriousness of it. Later, Nick will talk to Phyllis and Victoria about Victor’s potential guilt. He’ll think there’s a chance Victor killed J.T. and Phyllis will back up the idea. Victoria, on the other hand, will insist that it’s all a setup.

Once Nick takes off, Victoria will snap at Phyllis for feeding Nick’s doubts about Victor. Phyllis will think it’s smart since it points the finger at someone else. That’s when Victoria will explain the drama surrounding J.T.’s old clothes. She’ll add that Nikki would come clean before she ever let Victor take the blame.

Other Young and the Restless spoilers say Nikki will make an admission. She’ll meet with Jack (Peter Bergman) and confess that she took a drink. Nikki will talk about all the stress she’s dealing with, so Jack will want to help. They’ll agree to attend an AA meeting together and try to get Nikki back on track.

Afterward, Jack will call Kerry and score a date. He’ll look pleased as he keeps up his efforts to woo her. At Crimson Lights, Billy will have to be brutally honest with Reed. When the teen asks if Billy believes J.T. is dead, Billy will state that he does. He’ll be sorry and urge Reed to keep his rage in check, but Reed will insist on making the killer pay.

Finally, Nikki will take charge. Y&R fans can expect her fierce side to come out as she makes a bold declaration. Nikki will tell Victoria that she’s going to stop the tormentor and prove Victor’s innocence. She’ll urge her daughter to watch and learn!