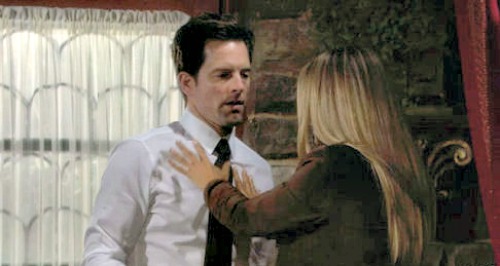 The Young and the Restless (Y&R) spoilers tease that Sharon Case (Sharon Newman) and Michael Muhney (former Adam Newman) have reunited. The only thing is, they didn’t reunite on-screen, it was for a Christmas party. Case and Muhney  shared a series of videos of them singing Holiday songs and mouthing Goodfellas movie quotes.

Sharon and Michael have remained close friends even after Muhney was let go from The Young and the Restless where his performance as Adam Newman was universally acclaimed as spectacular. Sharon Case has been Michael Muhney’s biggest CBS cheerleader in hoping that he would ink a new deal for the role of Adam Newman. So far, it has not happened. However, the fans have not lost hope.

In the comments section of Sharon and Michael’s social media posts of the videos, The Young and the restless fans chimed in hoping to see Muhney return to the role of Adam. Many of them commented on how sweet it is that he remained so close to Case.

Michael has not been overly busy since being fired with only a handful of other acting gigs, including an emotional role on ABC’s The Good Doctor. He played a dedicated father and shared scenes with Freddie Highmore. It was a great role for him.

At this point, Mal Young has not revealed whether he plans to recast the role of Adam Newman. It is possible that Michael Muhney would be able to ink another deal with Y&R, if they decided to resurrect Adam. It is almost universally acknowledged that an Adam Newman return played by Michael Muhney would be terrific – in fact fans have clamoured for just such a return since Justin Hartley left Y&R and moved on to ‘This is Us.’

It is so sweet that Sharon has remained close to Michael and his wife. They have a special friendship and these videos below prove it. Don’t forget to come back to CDL later for more Young and the Restless spoilers, news, and casting updates!

I have a beautiful singing voice pic.twitter.com/ZUe3ql76VL