BY Kinsley Goldman on December 10, 2018 | Comments: one comment
Related : Soap Opera, Spoiler, Television, The Young and the Restless 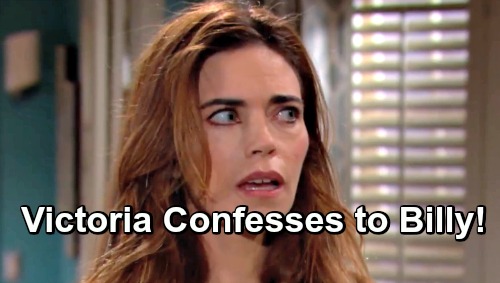 The Young and the Restless (Y&R) spoilers tease that Billy (Jason Thompson) will insert himself into the cover-up crew drama. Since Phyllis (Gina Tognoni) shuts down Billy’s reunion attempt on Monday, he’ll undoubtedly be feeling lost. Billy can usually pick up the pieces when it comes to Phyllis, but not this time. He’ll need a distraction and he’ll find it when Reed (Tristan Lake Leabu) returns to Genoa City.

During Reed’s last stint, Billy became a trusted confidant. Reed was able to open up to Billy about things he couldn’t share with Victoria (Amelia Heinle). The Young and the Restless spoilers say he’ll do the same during his comeback. Reed will dial down his rage for his mom’s benefit, but he’ll really let loose with Billy later. He’ll make it clear that if someone killed his dad, he or she’s going to pay.

J.T.’s death has taken a toll on the teen, so Billy will grow concerned. He’ll fill Victoria in on Reed’s fury and wonder how he can help. The Young and the Restless spoilers say Victoria and Billy will reconnect as they work together on this. Billy will assure Victoria that he’s got her back. He’ll step up and hope he can keep Reed from losing his grip.

After Nikki (Melody Thomas Scott) lands in the hospital with serious injuries, Billy will support Victoria through that, too. She’ll be in a dark place over the last few months of mayhem. Victoria’s been dealing with this horrible secret of J.T.’s death and all the lies that followed. Once Reed’s out of control and Nikki’s fighting for her life, Victoria could reach her breaking point.

Will Victoria let something slip to Billy? Could she break down and confess to him in a vulnerable moment? It makes sense that Y&R would want to drag this story out a bit more. A good way to do that is by bringing another character or two in the loop. It’d be better than just letting everything explode at once.

Victoria has become one of the strongest links in this pact, so it’d be a twist for her to blab. Billy is actually a great choice to bring in the secret circle since he’s formed a solid friendship with Sharon lately. His connections to Phyllis and Victoria also work in his favor here. It’d be fun to see how the ladies would navigate this mess with Billy involved.

Will Victoria and Billy’s growing bond lead to a reunion or just the shocker of a lifetime? Will Victoria crumble and admit what really happened to J.T.? We’ll give you updates as other Y&R news comes in. Stay tuned to the CBS soap and don’t forget to check CDL often for the latest Young and the Restless spoilers, updates, and news.