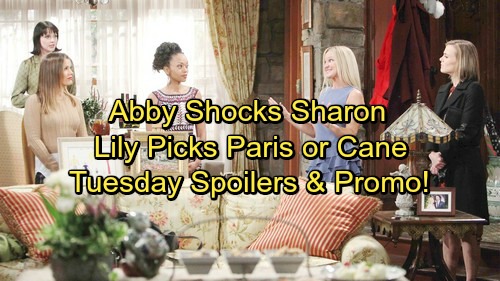 The Young and the Restless (Y&R) spoilers for Tuesday, January 9, tease that Sharon (Sharon Case) will try to stay positive. She was furious and devastated over Scott’s (Daniel Scott) betrayal, but she’ll attempt to shake it off. What’s the best way to do that? Throw a party of course! In an effort to move forward, Sharon will decide to invite some friends and frenemies over for a ladies’ night.

Naturally, Mariah (Camryn Grimes) will be on the guest list. Things could get tricky for her since Tessa’s (Cait Fairbanks) going to be there, too. This might be a good opportunity for Tessa to make some progress with Mariah. Their friendship was shattered thanks to Tessa’s rejection, but she’d really like to make amends with her former bestie.

Chelsea (Melissa Claire Egan) will also get an invite, which makes sense. Other eyebrow-raising guests will be Phyllis (Gina Tognoni) and Hilary (Mishael Morgan). Sharon isn’t exactly close to either one of them, but Y&R is trying to expand some social circles.

Plus, Sharon may have a new outlook on life. This might be a “putting the past behind us” gathering. There’s no point in dwelling on old feuds in 2018. However, that doesn’t apply to Sharon’s beef with Abby (Melissa Ordway). When Abby makes a sudden appearance, Sharon will assume her rival’s ready for another round of fighting.

The Young and the Restless spoilers say Abby will ask for a moment alone with Sharon. She’ll want to explain how she’s feeling. Sharon will suggest that if Abby has something to say, she can say it in front of everyone. As a result, Abby will apologize publicly and express deep regret for her actions. She’ll also be sorry about how she reacted when Sharon first confronted her.

While Sharon faces Abby’s shocker, Lily (Christel Khalil) will give Cane (Daniel Goddard) her decision. She’s got an awesome career opportunity waiting for her in Paris. Unfortunately, it could take her away from Genoa City for a few weeks. Since Lily’s on the verge of a reunion with Cane, it’ll be tough for her leave.

After mulling it over, Lily will make her choice and hope that it’s the right one. Will she bail for work or stay to fix her marriage instead? We’ll give you updates as other Young and the Restless news comes in. Stick with Y&R and don’t forget to check CDL often for the latest Young and the Restless spoilers, updates and news.