BY Heather Hughes on July 9, 2018 | Comments: one comment
Related : Soap Opera, Spoiler, Television, The Young and the Restless 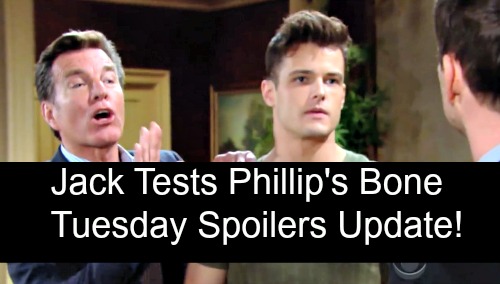 The Young and the Restless (Y&R) spoilers for Tuesday, July 10, tease that Billy (Jason Thompson) will have a risky plan. He’ll hope he can win back the yacht, but Summer (Hunter King) won’t know if he can pull it off. She’ll hate that she’s to blame for Billy getting back into gambling.

When Ashley (Eileen Davidson) arrives, she’ll want Billy to share all the company details. Billy will point out that he’s still in charge, so Ashley will promise she understands that. However, she’ll have a problem with Summer butting in everything. Ashley will corner Summer in the hall and ask for a breakdown of her duties ASAP. It sounds like Ashley will be on a bit of a COO power trip!

Meanwhile, Sharon (Sharon Case) will give Phyllis (Gina Tognoni) updates on the J.T. (Thad Luckinbill) sighting. Phyllis won’t be sure she buys it, but a text will interrupt their conversation. They’ll head over to see Victoria (Amelia Heinle), who’ll believe they have to face this. She’ll think J.T.’s coming for the cover-up crew, so they have to be prepared.

Once Nick (Joshua Morrow) finds them together, he’ll seem pretty suspicious. Nevertheless, Y&R spoilers say Nick will shift gears and offer reassurance to Victoria. He’ll let her know a security team will be protecting her family.

After talk turns to the damage at Newman, Nick will indicate that he doesn’t care about Victor’s (Eric Braeden) suffering. He’ll also get a call from Brittany (Lauren Woodland) about the custody case. The judge intends to make a final decision on who gets Christian (Jude and Ozzy McGuigen). Nick and Victor will know the ruling by the end of the day, so they’ll just have to wait and worry.

Back with Billy, he’ll need Summer’s help with his Jaboat recovery efforts. The Young and the Restless spoilers say Summer will decide she’s in. She contributed to Billy’s mess, so she can play a role in getting him out of it.

In the Abbott home, Cane (Daniel Goddard) will chew Kyle (Michael Mealor) out for gravedigging. Jack (Peter Bergman) will do his best to settle them down, but Cane will remain agitated about Chancellor Industries. He’ll warn that Jack and Kyle can’t gain control, even if they’re Chancellors. Katherine (Jeanne Cooper) left the company to Victor and he ultimately sold it.

A little later, Jack will decide he has to know the truth. He’ll agree to use the bone Kyle found for a DNA test, so answers are coming soon. Elsewhere, Ashley (Eileen Davidson) will give Neil (Kristoff St. John) an insider tip that could work to his advantage. That tip will pay off in the near future.

Finally, Nate (Brooks Darnell) will open up to Cane about his painful past. His true love died, so he had to get away from all the memories in Boston. Cane will try to set Nate up with someone new, but he won’t be interested. It seems Nate just isn’t ready for that, but he should be open to love eventually.