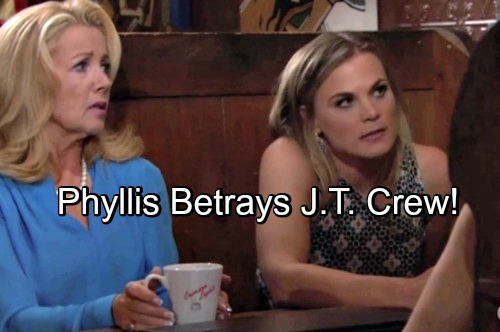 The Young and the Restless (Y&R) spoilers for Tuesday, July 3, tease that the cover-up crew will tackle another problem. On Monday, July 2, Phyllis (Gina Tognoni) suggests digging up J.T.’s (Thad Luckinbill) body to ease their fears. She convinces Nikki (Melody Thomas Scott) to close the park so they can scope out the scene. Unfortunately, a stunning discovery derails their exhumation plan.

In Tuesday’s new Y&R episode, July 3, the ladies will mull over the latest obstacle. Sharon (Sharon Case), Victoria (Amelia Heinle), Nikki and Phyllis won’t be able to dig after all. It looks like concrete’s already been poured over that spot and a sculpture’s smack dab in the middle of it. Phyllis will realize they’re going to need a new scheme, but she’ll ultimately go rogue!

The Young and the Restless spoilers say tension will erupt within this alliance, so Phyllis will focus on saving herself. She’ll plan on forming a new pact, but who’s going to get involved? Hilary (Mishael Morgan) might be a good option. She’ll accidentally discover a secret on Tuesday, so it could be this one. If she gets a clue about J.T. and wonders what’s up, Phyllis might spill the whole story.

Phyllis and Hilary are friends with the same mindset. They understand each other’s scheming side, so Phyllis might feel like she can trust her. Of course, there could be trouble if Hilary gets in this too deep. A dangerous sabotage plot’s afoot at Newman, so pregnant Hilary should be wary. Y&R fans know Hilary’s on her way out, so this risky ordeal could play a role in her exit.

Whatever the case, Phyllis’ next move will bring outrage from her partners in crime. That could widen the rift and cause major issues. Meanwhile, Nikki will stand with Victor (Eric Braeden) and face a crisis. This may involve Nick’s (Joshua Morrow) decision to use the interview against his father.

Nick’s determined to get custody of Christian (Jude and Ozzy McGuigen) back, so he’ll play dirtier and dirtier to make that happen. He’ll hold nothing back in this fierce fight, so Victor will have to handle the fallout. We’ll give you updates as other Young and the Restless news comes in. Stick with Y&R and don’t forget to check CDL often for the latest Young and the Restless spoilers, updates, and news.