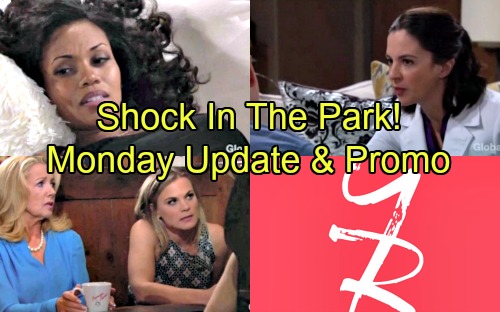 The Young and the Restless (Y&R) spoilers for Monday, July 2, tease that Sharon (Sharon Case), Victoria (Amelia Heinle), Phyllis (Gina Tognoni) and Nikki (Melody Thomas Scott) will meet up once again. They’ll examine the security footage and wonder if that’s actually J.T. (Thad Luckinbill). Phyllis will contend that the tape’s probably been altered, but the rest of the gang will continue to fret.

After some bickering, Phyllis will suggest digging up J.T.’s corpse. She’ll think Nikki can shut down the park for a while and give them a chance to get sneaky. Once Nick (Joshua Morrow) arrives, he’ll realize they’ve been discussing J.T. Luckily, Sharon will make up some excuses to throw him off the trail.

Later, Nick will speak with Nikki alone. He’ll feel like Victor’s (Eric Braeden) health is more serious than she’s letting on. Nikki will maintain that Victor’s OK, but Nick still won’t buy it. They’ll have a heated argument, but Sharon will ultimately settle them down. Nick will get emotional as he talks about how much he misses Christian (Jude and Ozzy McGuigen). Sadly, Y&R spoilers say Nikki won’t offer to help.

Over with Billy (Jason Thompson), he’ll be feeling good about the projected sales at Jabot. As a result, Billy will hand out bonuses to the board members. The Young and the Restless spoilers say Jack (Peter Bergman) will turn his bonus down. He’ll warn Billy about getting too cocky and suggest putting that money back into the company.

Afterward, Jack will sit down for a chat with Kyle (Michael Mealor). They’ll discuss Jack’s plan to sue Jill (Jess Walton) and get Dina (Marla Adams) to testify. Kyle will want to offer assistance, so he’ll make a suggestion. He’ll think they should walk Dina through the process first, which will sound helpful to Jack.

At home, Summer (Hunter King) will come clean to Phyllis. She’ll admit she burned through her trust fund and now she’s flat broke. Phyllis will be surprisingly understanding, but she’ll give her daughter a warning. She’ll contend that Summer can’t resort to begging and mooching. Phyllis will want Summer to focus on earning her own money, but she’ll appreciate her honesty.

Once Phyllis arrives at Jabot, she’ll fill Billy in on the breakthrough. Phyllis will feel like Summer’s finally on the right track. A little later, Summer will spot Billy playing poker at the athletic club. He’ll brush it off as nothing, but Summer will still vow to keep his secret. She’ll suggest that Billy can decide what he brings Phyllis in the loop on.

At the penthouse, a technician will appear for Hilary’s (Mishael Morgan) mobile ultrasound. Devon (Bryton James) will start to panic when she can’t find the baby’s heartbeat. It’ll be a false alarm, so they’ll hear their little one’s ticker after all. Devon and Hilary will be ecstatic, but their joy won’t last long. The Young and the Restless spoilers say a crushing miscarriage is still headed their way eventually.

Back with Nick, he’ll get in touch with Brittany (Lauren Woodland). After Nick passes along a link to Victor’s interview, he’ll push Brittany to prove his dad shouldn’t have Christian (Jude and Ozzy McGuigen). Nick will be convinced that Victor’s quite ill, so he should be able to exploit this weakness.

Finally, Sharon will catch up with the rest of the cover-up gang. They’ll all be gaping at something shocking in the park. Sharon will wonder what in the world they’re looking at. Did someone leave a clue for them to find? We’ll give you updates as other Y&R news comes in. Stay tuned to the CBS soap and don’t forget to check CDL often for the latest Young and the Restless spoilers, updates, and news.