The Young and the Restless Spoilers: Week of July 2-6 – Big Secrets, Stunning Encounters and Digging Up The Dead

BY Heather Hughes on June 29, 2018 | Comments: one comment
Related : Soap Opera, Spoiler, Television, The Young and the Restless 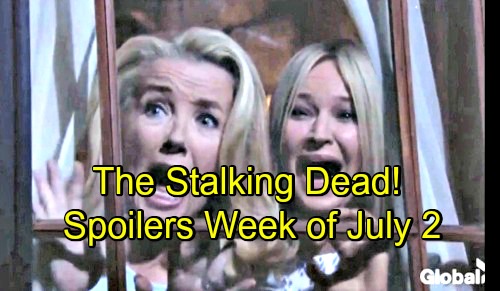 The Young and the Restless (Y&R) spoilers for the week of July 2-6 tease that the action’s about to heat up in Genoa City. First, we should talk about a huge return. This character comeback will also mark the debut of a handsome new actor. Brooks Darnell is joining the Y&R cast as Nate Hastings, Jr.

Nate will be back in town to offer his services as a doctor and his patient will be no surprise. It’s the great Victor Newman (Eric Braeden). Of course, Victor isn’t feeling so great anymore! That’s why Nate will treat “The Moustache” secretly. He’ll hope he can help speed Victor’s recovery along.

Meanwhile, it looks like Victor will go MIA for a bit. Neil (Kristoff St. John) will do his best to handle the growing crisis at Newman, but it won’t be easy. Things are really spiraling out of control. The Young and the Restless spoilers say Ashley (Eileen Davidson) will drop by Neil’s penthouse and express concern.

Suddenly, a wet Nate will come downstairs in only a towel. Ashley’s eyes will widen in shock as she greets him. Their encounter will force Neil to explain and later, Ashley will make a bold move. She may try to lock in some power while Victor gets his strength back.

Speaking of power, Cane (Daniel Goddard) will hope to protect his position at Chancellor. He likes being the head honcho, so he won’t want Jack stirring up any additional trouble. Nevertheless, The Young and the Restless spoilers say Jack’s mission will press on. Kyle (Michael Mealor) will grow closer to his dad as he pitches in. They’ll do whatever they can to get around the blocked exhumation.

Phyllis (Gina Tognoni) will also want to dig up a body this week. As the J.T. (Thad Luckinbill) chaos revs up, she’ll think it’s the easiest way to put their suspicions to rest. Sharon (Sharon Case), Victoria (Amelia Heinle) and Nikki (Melody Thomas Scott) will object, but they’ll have bigger problems soon enough. When J.T. appears outside the window, Nikki and Sharon will be in full-blown panic mode.

Other Young and the Restless spoilers say Abby (Melissa Ordway) and Arturo (Jason Canela) will hit the sheets. They’ll have wild sex and love every minute of it. Over with Hilary (Mishael Morgan) and Devon (Bryton James), they’ll face a horrifying ordeal. Hilary’s doctor will be unable to detect a heartbeat, so they’ll fear their baby didn’t make it.

A lot’s happening in GC, so be sure to check out this week’s hot episodes. We’ll give you updates as other news comes in. Stick with Y&R and don’t forget to check CDL often for the latest Young and the Restless spoilers, updates, and news.