BY Heather Hughes on June 4, 2018 | Comments: one comment
Related : Soap Opera, Spoiler, Television, The Young and the Restless 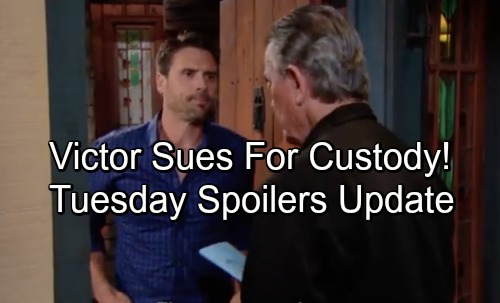 The Young and the Restless (Y&R) spoilers for Tuesday, June 5, tease that Phyllis (Gina Tognoni) will be thrown for a loop. Having Summer (Hunter King) back in town is sure to bring some complications. After Billy (Jason Thompson) and Phyllis put some clothes on, they’ll seek answers about her sudden return. Summer won’t offer much info before she heads out to party.

Meanwhile, Tessa (Cait Fairbanks) will mention Devon’s (Bryton James) Hot Summer Nights bash. It’s happening at The Dive Bar later, so she’ll want Mariah (Camryn Grimes) and Kyle (Michael Mealor) to come. Mariah will suggest that she has to be at work pretty early. She’ll use it as an excuse to skip the event, but Kyle won’t let it go.

After Tessa’s gone, Kyle will contend that Mariah shouldn’t have turned down the invite. He’ll still feel like Tessa’s interested in Mariah. They’ll end up heading to the party together, but things certainly won’t go as planned.

At the athletic club, Abby (Melissa Ordway) will blast Arturo (Jason Canela) for his deception. She’ll think he should’ve come clean about his relationship with Nikki (Melody Thomas Scott). Arturo won’t see why Abby’s so upset about this. He’ll argue that it was just a fling and they’ve put it behind them.

Abby will hint that Arturo’s going after another Newman now, but he’ll insist that her last name has nothing do to with it. Up at The Dive Bar, there’ll be plenty of music and dancing. When Summer’s voice emerges from the DJ booth, it’ll give Mariah and Kyle a shock. They’ll both be less than thrilled about Summer’s return.

Y&R spoilers say Summer will eventually move toward Kyle for an awkward hug. He’ll quickly dash off and tell Mariah that he’s not over his ex. Afterward, Tessa will mention Summer and her flashy sports car. She’ll get the scoop on Summer’s bratty nature from Mariah and watch as the blonde hits the dancefloor.

When Abby arrives, she’ll see Arturo and Summer strutting their stuff. She’ll have another outburst, which will include dumping ice water on Arturo’s head. Later, the cops will show up. They’ll be looking for the driver of the sports car Summer arrived in. Once she’s identified, Summer will be arrested for felony auto theft!

Across town, Phyllis will fill Nick in on Summer’s comeback. With Sharon (Sharon Case) by his side, Nick (Joshua Morrow) will also deliver the moving bombshell. He’ll feel like it’s best to get away from Victor (Eric Braeden), but Phyllis will have concerns. Once she’s alone with Billy, Phyllis will confess that having Summer around will be an adjustment. She won’t like the thought of Nick bailing right now.

Back at home, Nick will get an unpleasant surprise. The Young and the Restless spoilers say Victor will serve him with an injunction. He’ll note that Nick can’t take Christian (Jude and Ozzy McGuigen) out of the state. Victor will announce that he’s suing for full custody, so expect Nick’s fury to erupt.