BY Heather Hughes on May 14, 2018 | Comments: one comment
Related : Soap Opera, Spoiler, Television, The Young and the Restless 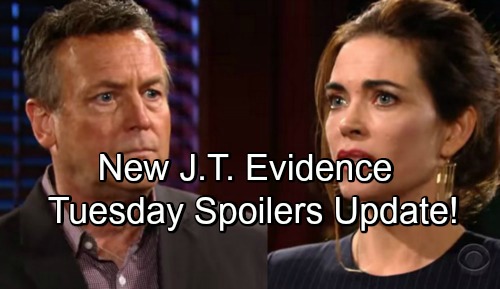 The Young and the Restless (Y&R) spoilers for Tuesday, May 15, tease that Nick (Joshua Morrow) and Phyllis (Gina Tognoni) will corner the culprit. They’ll catch up with the man who has J.T.’s (Thad Luckinbell) phone, but it won’t be the real deal. After Phyllis and Nick realize it’s a homeless guy, the cops will arrive to give Nick a lecture. They won’t be happy about his interference in the investigation.

At the ranch, Victoria (Amelia Heinle) will spot Nikki (Melody Thomas Scott) and Arturo (Jason Canela) sharing a goodbye kiss. Y&R spoilers say Nikki will promise that things are over between them. They’ll be discussing the latest J.T. details when Phyllis shows up. She’ll announce that Paul (Doug Davidson) has J.T.’s cell and Nick’s more determined than ever.

Later, The Young and the Restless spoilers say Victoria will find Nick at Sharon’s (Sharon Case) place. She’ll insist that she just wants to drop all the J.T. drama. Sharon will back Victoria up, but Nick will maintain that J.T. needs to pay.

Afterward, Victoria will be summoned for a conversation with Paul. He’ll want to grill her about the texts found on J.T.’s phone. Victoria will quickly start to panic. She’ll turn to Nikki for advice as this situation heads downhill.

Other Y&R spoilers state that Devon (Bryton James) and Hilary (Mishael Morgan) will enjoy a warm moment. At Hamilton-Winters, Devon will listen to a potential new artist for his label. As Hilary sways to the music, Devon will pull her close and they’ll dance together. It’s clear that these two are growing closer!

At Jabot, the Abbott clan will be in crisis mode. Kyle (Michael Mealor) will let Billy (Jason Thompson) read Jack’s (Peter Bergman) DNA results. He’ll note that his dad was guzzling booze and eventually took off. Ashley (Eileen Davidson) and Abby (Melissa Ordway) will rush over for updates as well. They’ll discover that Jack didn’t sign an important document for a last-minute deal.

An emergency meeting will be called soon enough. Ashley will insist that Billy needs to step up as Jabot’s new CEO. He’ll be reluctant, but Ashley and Phyllis will believe Billy can handle this. The Young and the Restless spoilers say Billy will accept the position, but he’ll hope to track down Jack ASAP.

Elsewhere, Abby will rip into Kyle. She’ll still believe he’s the reason Victor (Eric Braeden) had ammo. Abby will vow to get to the bottom of this, so Kyle’s definitely facing a threat. We’ll keep you posted as other Y&R news comes in. Stick with the CBS soap and don’t forget to check CDL often for the latest Young and the Restless spoilers, updates, and news.