The Young and the Restless Spoilers for Next 2 Weeks: Jack’s Trouble Doubles – Billy Gets Bold – Victor’s Shocking Offer

BY Marcy Cohen on May 14, 2018 | Comments: one comment
Related : Soap Opera, Spoiler, Television, The Young and the Restless 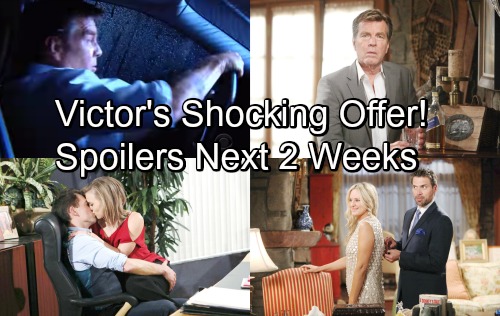 The Young and the Restless (Y&R) spoilers for the next two weeks tease that some big shakeups are brewing in Genoa City. The week of May 14-18 will kick things off with some shocking DNA results. Jack (Peter Bergman) will look at them and determine that he’s not a blood Abbott. He’ll quickly ditch his responsibilities at Jabot and devote his time to easing his pain.

While Billy (Jason Thompson) takes the throne, Jack will pop pills and guzzle booze. He’ll ultimately land in a car crash, so he definitely won’t take the paternity news well. Meanwhile, Devon (Bryton James) and Hilary (Mishael Morgan) will share a sweet dance. They’ll continue to bond over their potential baby, but we’ll soon see that Devon’s hiding something.

Will this secret rock the boat or be a pleasant surprise? Either way, Y&R seems to be building toward a happy “Hevon” family. Devon and Hilary’s reunion should be here before you know it. Across town, Phyllis (Gina Tognoni) will help Nick (Joshua Morrow) corner a guy with J.T.’s cell phone. Nick will believe he’s catching up with J.T. himself, so it looks like he’ll be bummed when it’s not him.

Over with Victor (Eric Braeden), he’ll face plenty of accusations. Both Abby (Melissa Ordway) and Kyle (Michael Mealor) will think Vic had something to do with the altered footage. The week of May 21-25 will bring an intriguing plan. The Young and the Restless spoilers say Abby will be on a mission for answers, so she’ll end up taking a huge risk. Will she try to trap her own father? That’d take some guts!

Elsewhere, Jack (Peter Bergman) will get some terrible updates. Will he suffer injuries in his car accident from the week before? Could Jack be left with major damage? Those are possibilities to consider. However, this could also involve Billy’s new role at Jabot. If Billy starts making ill-advised moves, Jack’s sure to be troubled.

The Young and the Restless spoilers say Billy will definitely use his power to his advantage. Phyllis may feel a bit caught in the middle here, but she’ll assure Billy of her support. She has to stand by her man. Back with Victor, he’ll give someone a surprising offer. Could Victor want Ravi’s (Abhi Sinha) help with a tech task? Will it involve another shady deal with Kyle or even Billy instead?

There are loads of options when you’re dealing with Victor. He’s always got several plots cooking up, so stay tuned. We’ll keep you posted as other Y&R details emerge. Stick with the CBS soap and don’t forget to check CDL often for the latest Young and the Restless spoilers, updates, and news.