BY Sean O'Brien on May 14, 2018 | Comments: one comment
Related : Soap Opera, Spoiler, Television, The Young and the Restless 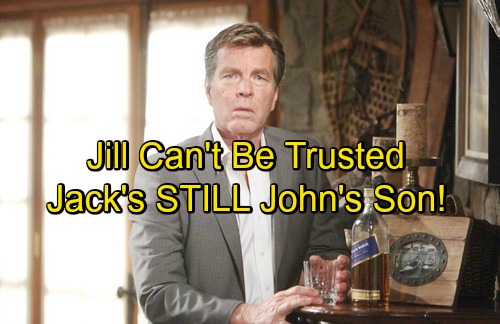 Who would have ever thought that Jack wasn’t John’s (Jerry Douglas) son? Executive producer and head writer Mal Young, that’s who. Young’s intriguing and well-crafted storyline is playing out this spring. As it does Y&R’s seasoned fan base is waiting to see if the man they’ve observed for years might actually be not part of the Abbott blood line. But if Jack isn’t, then who was his dad?

The reaction shot on Jack’s face at the movie house was classic. Bergman’s made millions off his acting, which includes the looks he sports via his everyman mug.

Abby (Melissa Ordway) was stunned to think that her uncle was only half-related. Her mom, Ashley (Eileen Davidson), had a different response based upon her own mid-1980’s reveal. That moment genetically linked her to Brent Davis (Bert Kramer) forever. So Ash had a quickie test conducted which verified that Dina conceived another one of her children from someone other than John.

Due to her Alzheimer’s condition, Dina has been unable to recall the name of the cheater who supposedly sired Jack. Like many, Jack didn’t believe his mother’s utterings and had his own DNA appointment set. Like his half-sister determined, he wasn’t an Abbott, or so it seems.

Billy is believed to be John’s son based purely on Jill’s (Jess Walton) history. She was so desperate to link herself to the Jabot founder that Jill got John drunk one night, engaged in relations on an old-school chair at the Abbott abode and seemingly conceived the character Thompson currently plays.

Of course Jack’s assumptions, like everyone else’s, aren’t proof. What Y&R fans know to-date is that he’s not related by blood to Traci (Beth Maitland), who Ashley had Jack’s hair sample tested against. Jack also isn’t related to Billy. But that could mean John didn’t father Traci, or Billy.

Somehow, someway a piece of John will need to be located, found, or retrieved through exhumation. That sample can then be tested against Jack’s provided material. If the men aren’t connected, then Bergman’s character will need to determine who his real father is.

But if this method proves Jack is John’s son, then Traci and Billy will be befuddled. Plus, Jack would return as Jabot’s CEO. CDL is a leading source for everything linked to The Young and the Restless. Check back regularly for Y&R spoilers and news!