The Young and the Restless Spoilers: Abby Sets a Risky Trap for Victor – Exposes Dad’s Role in Jack’s Suffering

BY Heather Hughes on May 11, 2018 | Comments: 3 comments
Related : Soap Opera, Spoiler, Television, The Young and the Restless 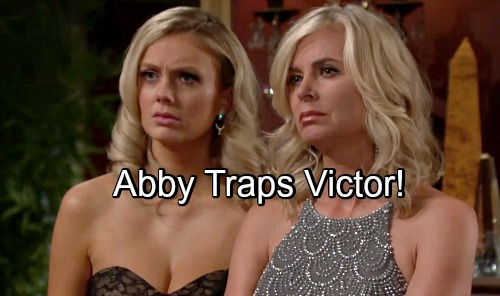 The Young and the Restless (Y&R) spoilers tease that Abby (Melissa Ordway) will be on a mission for answers. She could be on the verge of uncovering the truth. In Friday’s Y&R episode, Abby wonders if Victor (Eric Braeden) might be to blame for the screening mayhem. She loves her father, but she knows this kind of thing would be right up his alley.

Victor and Jack (Peter Bergman) have been enemies for years, so they always have a motive to hurt each other. Kyle (Michael Mealor) and Victor’s connection will stir up suspicions as well. Since Ravi (Abhi Sinha) restored the memory card for Kyle, Abby will guess that Victor gained possession of the video and altered the footage to stick it to Jack. She could certainly be right about that.

Nevertheless, Abby may hope that she’s wrong. She won’t want to make assumptions, especially since there’s so much at stake. Abby won’t think Victor should get away with this if he’s responsible, but she won’t want to provoke Jack’s wrath if her dad’s innocent. There’s no need to feed their feud without a solid reason.

Abby needs proof if she’s going to expose anything. She may take steps to get it during the week of May 21-25. The Young and the Restless spoilers say Abby will do something quite risky. Perhaps she’ll set a trap and hope Victor walks right into it. Abby might think she can catch Victor in a lie or secure an admission of guilt.

If Abby confirms Victor’s to blame for the public paternity revelation, she’ll likely confront him immediately. Abby may lash out at Victor and rant about lines that shouldn’t be crossed. By hurting Jack, Victor’s hurting Abby as well. She won’t appreciate all the drama her family’s been stuck in.

After dishing out a harsh lecture, Abby might feel obligated to tell Jack. She may worry about the continued threat of Victor and Kyle’s partnership. The Young and the Restless spoilers say Jack and Victor’s war could intensify soon, so we’ll give you updates as other Y&R news comes in. Stick with the CBS soap and don’t forget to check CDL often for the latest Young and the Restless spoilers, updates, and news.