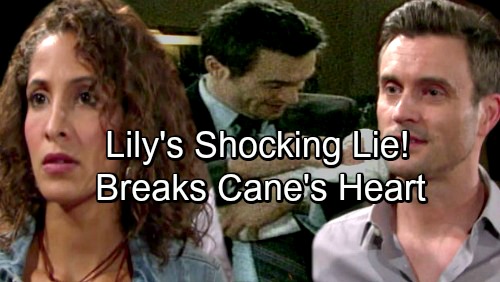 The Young and the Restless (Y&R) spoilers tease that Cane (Daniel Goddard) will settle back in at Lily’s (Christel Khalil) place and they’ll try to find their new normal. Lily isn’t exactly confident about the baby drama ahead of them. She knows Sam’s sweet and innocent, but the fact is she’s going raise a kid that’s not hers. This could be an issue as they face the bumpy road ahead.

Lily won’t want to deny Sam of the love he needs, but she’ll still deal with some challenges. She’s already facing an uphill battle as she learns to trust Cane again. However, it looks like Lily will be the untrustworthy one at first. The Young and the Restless spoilers say Lily will panic when a problem arises. She’ll decide to lie her way out of a jam, so that’s sure to cause a hiccup in her relationship.

Lily makes an effort to bond with Sam on Friday’s Y&R, January 19, and even cracks a slight smile. Unfortunately, her new parenting adventure will remain tough. Lily may struggle to connect with Sam over the next few episodes. She’ll put on a brave face for Cane’s sake, but she’ll worry she can’t do this deep down.

That’s where Lily’s lie could come in. Perhaps Cane will urge Lily to spend some time alone with Sam. If he’s busy with work, Cane might suggest this would be a good bonding opportunity. He’ll undoubtedly believe that things are going quite well. Cane may think Lily and Sam will be fast friends soon enough.

Will Lily tell a fib to wiggle out of babysitting? She might feel like she’s just not ready to take care of Sam by herselr. Lily’s feeling pretty overwhelmed by all of this. Whatever the case, The Young and the Restless spoilers say Cane will eventually discover Lily’s deception. He’ll be upset over this setback in their reunion.

It sounds like Lily and Cane still have a lot of work to do. Thankfully, they should iron out all the kinks sooner or later. We’ll give you updates as other Y&R news comes in. Stay tuned to the CBS soap and don’t forget to check CDL often for the latest Young and the Restless spoilers, updates and news.