BY Heather Hughes on January 8, 2018 | Comments: one comment
Related : Soap Opera, Spoiler, Television, The Young and the Restless 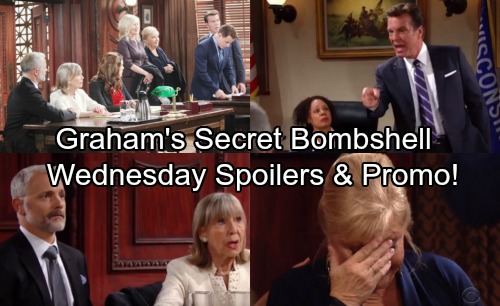 The Young and the Restless (Y&R) spoilers for Wednesday, January 10, tease that a courtroom battle will soon be underway. Graham (Max Shippee) will face off with the Abbotts, which means Dina (Marla Adams) will be stuck in the middle of it. We’re sure to see plenty of tension once everyone arrives at the courthouse.

Jack (Peter Bergman) will be ready to take Graham down. Ashley (Eileen Davidson) and Traci (Beth Maitland) will also hope the judge will see things from their perspective. Still, there’ll be concerns about the outcome. If they can’t score a win, Dina’s health could take a serious hit.

The Abbotts had some missteps while taking care of Dina, but their hearts were in the right place. Graham, on the other hand, has returned with seemingly ruthless motives. There might be a small part of him that still wants what’s best for Dina, but he’s mostly looking out for himself. Graham obviously wants money, power and revenge on the Abbott family.

The Young and the Restless spoilers say Graham will take a huge step toward accomplishing his goals. He has major secret that he’s been waiting to reveal. Graham’s the kind of guy who can be patient. He doesn’t mind dragging his feet on a revelation if it’ll pay off in the end. Graham will feel certain that his latest shocker is going to change everything.

During the courtroom proceedings, Jack will grow increasingly agitated. He’ll stand up and blast Graham for trying to take advantage of Dina. Jack will argue that Dina’s Alzheimer’s diagnosis makes her vulnerable to Graham’s sneaky tactics. He’ll refuse to let Graham get away with his devious plan.

Y&R fans can expect Graham to drop his bomb and add to the chaos. There are several options here. Some viewers think Graham and Dina (Marla Adams) may have had a secret wedding a while back. Others suspect Graham might be John’s (Jerry Douglas) biological son, which would make him an Abbott and would leave Jabot at risk.

Of course, this could also involve some sort of terrible dirt on the Abbotts. Regardless, Graham will be determined to use it against his enemies. Will his plot succeed – at least for now? We’ll give you updates as other Young and the Restless news comes in. Stick with Y&R and don’t forget to check CDL often for the latest Young and the Restless spoilers, updates and news.