The Young and the Restless Spoilers: Abby Leaves for Paris – Maternity Leave Kicks In – Shott Over, Scabby Shelved 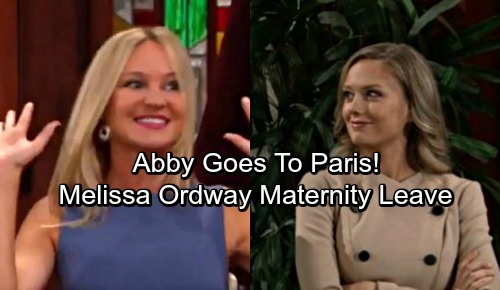 The Young and the Restless spoilers tease that Abby (Melissa Ordway) will be working in Paris for awhile. Her Newman Enterprises’ assignment will be indefinitely, which addresses an on-screen problem and a real life cast issue.

Scott (Daniel Hall) and Abby became increasingly involved with each other after the storage unit incident. That life-threatening situation proved personally disastrous for Mr. Grainger, as the emotions stirred during the event exposed latent feelings he and Abby had for each other.

After surviving that ordeal, Scabby formed. Scott and Abby were caught kissing in public on multiple occasions, which eventually resulted in a messy reveal that ended one couple and shelved another.

Nick’s (Joshua Morrow) witness of Scott and Abby’s New Year’s Eve kiss led to Sharon’s (Sharon Case) awareness of Scabby. She opted to kick Mr. Grainger out of the Cottage, where he just recently agreed to move into. Sharon also fought Abby at the Genoa City Athletic Club, which butterfly effected (an invented term for our purposes) Christian (Jude and Ozzy McGuigen).

While that little boy is genetically connected to Nick, it’s not in the way his supposed father thinks. Sharon flashed back to the Sully ruse. However, those issues can be addressed in a future feature. For now let’s stick to Scabby.

Abby was slapped and slapped Sharon’s face in response. Then, both ladies proceeded to wring each other’s necks and pull each other’s blonde manes. Oh how juvenile, while also deliciously soapy. Yet, that fight scene was needed in order to spurn Abby’s Atlantic Ocean travel.

As daytime dramas record approximately six weeks in advance, Y&R needed to creatively write Abby out. Newman’s executive will apparently be working on an important project, as her father will allow her time to heal. How Victor (Eric Braeden) responds to Scott’s involvement with his daughter will soon be determined.

And then there is poor Sharon, who’s alone again. Dylan left her a year ago, but she got through it. Here’s hoping that TPTB behind the scenes don’t write Case’s character off the rails, as has been done so many times before.

Sharon knew Scott for less than a year. She was involved with him for a far shorter period than that. So Shott was hardly a legacy couple.

Put Scott behind you Sharon and move on. As you told Abby, she can have him (when Ordway returns).