BY Heather Hughes on November 26, 2018 | Comments: one comment
Related : Soap Opera, Spoiler, Television, The Young and the Restless 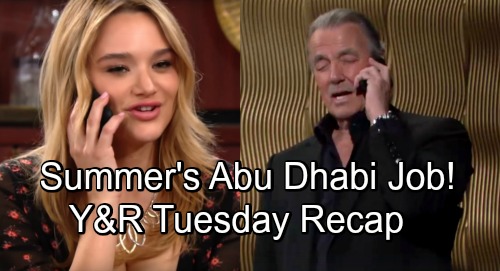 The Young and the Restless (Y&R) spoilers for Tuesday, November 27, tease that Mariah (Camryn Grimes) will come home from her weekend trip for GH buzz. Tessa (Cait Fairbanks) will suggest that Mariah must’ve made up the work assignment. She’ll believe Mariah just wanted to clear out before Victoria’s (Amelia Heinle) confrontation.

Mariah will assure Tessa that she had nothing to do with it. She’ll learn Victoria threatened to blame Tessa for J.T.’s (Thad Luckinbill) murder and took the backup thumb drive. Mariah will feel foolish for thinking Tessa actually handed over all the evidence. Tessa, on the other hand, will think she was protecting herself – and rightly so since Mariah lied about not ratting her out.

Mariah will rant about Tessa’s continued deception, but Tessa will point out that she never lied about her love. The fact that Mariah faked their reunion will sting, but Mariah will insist that she wanted to see if there was anything left between them. Tessa will wonder if there was, but she’ll walk out on Mariah when she doesn’t get an answer.

At the athletic club, Phyllis (Gina Tognoni) and Devon (Bryton James) will share a sweet conversation about Hilary (Mishael Morgan). They’ll talk about how she would’ve been proud of Phyllis’ new role as CEO. Phyllis will also want Devon to know that he has people in his corner. Hilary’s loved ones are Devon’s loved ones as well, so he’s got several sources of support.

Later, Cane (Daniel Goddard) and Nate (Brooks Darnell) will reach out to Devon. They’ll fret about Devon partying and staying out all night. Devon will feel like nothing is the same now and that’s just the way it is. He won’t appreciate having to defend his decisions like a kid with a curfew.

At Victoria’s house, the cover-up crew will consider who might’ve moved J.T.’s corpse. Victor (Eric Braeden), Jack (Peter Bergman), Nick (Joshua Morrow) and Billy (Jason Thompson) will all be tossed around as options. Nikki (Melody Thomas Scott) will also take a phone call from Victor, who needs someone to run his new office in Abu Dhabi.

Afterward, Nikki will track down Summer (Hunter King) and offer her the job. She’ll note that Victor wants to mentor her, but Y&R spoilers say Summer will express some hesitation. Once Nikki explains all the details, she’ll agree to let Summer think it over. Nikki will add that Summer shouldn’t let this opportunity slip away.

Over with Kyle (Michael Mealor), he’ll face resistance when he tries to talk about going to the cabin with Lola (Sasha Calle). Next, Kyle will chat with Summer. She’ll drop hints about there still being a chance for them, but Kyle will maintain that it’s not happening.

As a result, Summer will decide to accept the position. Unfortunately, Phyllis will take some convincing! She definitely won’t be happy about Summer working for Victor, so more drama’s ahead. In the meantime, Mariah will find the girls’ night gang and unleash her wrath. She’ll lash out at Victoria for not keeping her in the loop on the new plan.

Nikki will mention that Tessa tried to keep the money, so Mariah will comment on Tessa being a compulsive liar. She’ll have trouble wrapping her head around these two versions of Tessa that she knows. Victoria will think Mariah has to accept that there’s a more painful side and move on.

However, Nikki will draw from her own experience with Victor. She’ll suggest that sometimes you accept the reality of the situation and stay for the good in someone. Back at Tessa’s place, she’ll find Mariah waiting for her. Tessa will wonder what Mariah’s still doing there, but Mariah won’t really know. She’ll wish she could just leave her heart on the shelf, but that’s obviously not something she can do.

Other Young and the Restless spoilers say Lola will drop a bomb on Kyle. When he keeps up his cabin quest, Lola will suggest that he just wants to have sex. She’ll inform Kyle that she’s a virgin, so that’ll be quite a shock to the sex-hungry Abbott.