BY Marcy Cohen on November 26, 2018 | Comments: one comment
Related : Soap Opera, Spoiler, Television, The Young and the Restless 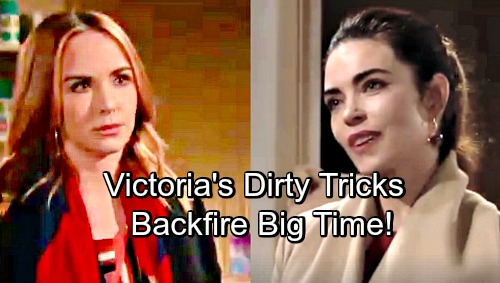 The Young and the Restless (Y&R) spoilers tease that Victoria (Amelia Heinle) is about to make a massive mistake. She thinks she’s so smooth slipping in Tessa’s (Cait Fairbanks) studio and acting so smug. In the end, Victoria will undoubtedly regret crossing the line with her dirty tactics.

On Monday, November 26, Victoria will drop two bombs that prove she’s Victor’s (Eric Braeden) daughter! She’ll threaten to let Tessa take the fall for J.T.’s (Thad Luckinbill) murder and expose the cameras she set up in the apartment. Victoria’s been watching Tessa’s every move, so this is a serious invasion of privacy.

Those cameras allowed Victoria to see Tessa stuffing the teddy bear with cash and an extra thumb drive, so she’ll snatch all that up. Of course, it’s worth mentioning that Tessa will get her phone out to call the cops at one point. She’s pretty sneaky, so it’d be interesting if she opened up a voice recorder app to capture whole conversation.

However, Tessa will also admit to the blackmail, which she probably wouldn’t want to do on tape. Her reaction seems to indicate that she doesn’t have much to back her up – except Mariah (Camryn Grimes), of course! The Young and the Restless spoilers say Mariah will explode when she hears what Victoria’s done. Sharon (Sharon Case) was in on this second plan, so that’ll make matters worse.

The cover-up crew had the nerve to torment Mariah by forcing her to feign forgiveness. She didn’t want to get back together with Tessa, but they bullied into it. Mariah even delivered a carefully rehearsed story about how she kept Tessa’s name out of it, but Victoria is blowing everything. You can bet Mariah’s going to wonder why she wasn’t brought in the loop on this alternative strategy.

Victoria’s threat to put Tessa behind bars for this will really put Mariah over the edge. Blackmailing the ladies was a rotten thing to do, but letting an innocent woman go down for an accidental death? That’s downright despicable!

The Young and the Restless spoilers say Mariah will side with Tessa on this. She won’t excuse Tessa’s actions, but she’ll inevitably think the cover-up crew’s behavior is far worse. They’re totally out of control here. Victoria and Sharon are especially going to get an earful when Mariah learns about the latest Y&R showdown.

If Victoria and the others aren’t careful, Mariah could take them down. She could at least guilt-trip Sharon into confessing and putting an end to this nightmare. Big trouble’s brewing, so Victoria will definitely pay the price! We’ll give you updates as other Y&R news comes in. Stick with the CBS soap and don’t forget to check CDL often for the latest Young and the Restless spoilers, updates, and news.