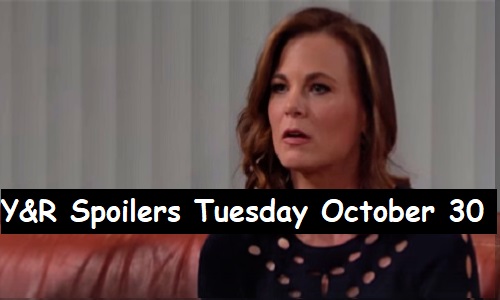 The Young and the Restless (Y&R) spoilers for Tuesday, October 30, tease that Nick (Joshua Morrow) will form a new plan. He’ll decide he’s got the perfect opportunity to make some progress with Sharon (Sharon Case). Nick recently complained that all Sharon was willing to talk about was the kids. However, he’ll eventually determine that’s not such a bad thing after all.

Faith (Alyvia Alyn Lind) and Christian (Jude and Ozzy McGuigen) will naturally want to have some fun as Halloween draws near. Nick will come up with a few surprises to impress Sharon and pull her back in. He’ll hope he can remind her of what a beautiful family they make. Nick hates the thought of throwing all this away over one screwup, so he’ll hope his last-ditch effort can save them.

Unfortunately, Sharon won’t waver from her never-ever-getting-back-together stance. She’ll always care about Nick as a doting father, but she’s done with all the romantic drama. Meanwhile, Jack (Peter Bergman) will face some drama of his own. He’ll be ready to tackle another challenge and bring unity for the Abbotts, but it’s not going to be easy.

Ashley (Eileen Davidson) heads to Paris in Monday’s episode and she takes all her patents with her. As Y&R fans might expect, Tuesday will bring conflict for those she leaves behind. Jack will once again find himself forced to step up. Ashley’s move could cause a significant financial hit for the company, but Jack will think they can overcome this hurdle. He’ll at least want to try!

Other Abbott family members won’t be as optimistic. Some of them might even suggest throwing in the towel, but Jack won’t stand for that. He’ll refuse to let John’s (Jerry Douglas) legacy crash and burn. The Young and the Restless spoilers say Jack will do some brainstorming and focus on rebuilding strategies. With any luck, Jabot will come roaring back and become more powerful than before.

Phyllis (Gina Tognoni) will sense an opportunity here, but it’ll mostly be one for herself. Since no Abbott belongs on the throne right now, Phyllis will want to the CEO seat. She’ll shoot her shot and convince Jack that it’ll distance them from their latest chaos.

Phyllis will believe they can frame this story in a positive light and send a clear message to their customers. Naturally, Billy (Jason Thompson) will object. Summer (Hunter King) will likely back her mom 100 percent, but Billy will hope to drag Phyllis down in a CEO battle. Too bad he’ll suffer a crushing defeat later this week!