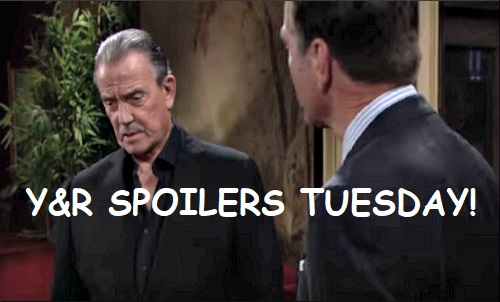 Of course, that’s terrible news for the cover-up crew. The Young and the Restless spoilers say Rey will start sniffing around again on Tuesday’s new Y&R episode. Now that he doesn’t have to hide what he’s up to, his mission should be even easier.

Sharon (Sharon Case) will definitely be keeping an eye on this nosy detective. Victoria will be equally concerned, so they’ll get together to gab about their fears. Meanwhile, Mariah (Camryn Grimes) will return home from her trip to Madison and take a gamble. There’s no confirmation on that this risk will entail, but you can bet it’ll revolve around Tessa (Cait Fairbanks).

Tessa intends to keep Mariah in the dark on her recent attack, but will that plan really pan out? She’s got some awful bruises all over her back and arms. If Mariah moves in for a hug or catches a sleeve slipping up too far, Tessa may not be able to hide what happened. That could easily convince Mariah to make a bold move before it’s too late.

Regardless, Mariah might step up her efforts to score Tessa the money she needs. She could ask Devon (Bryton James) to change his mind in light of Tessa’s injuries. Kyle (Michael Mealor) might be an option as well. Whatever the case, there has to be a way to score some quick cash. Let’s just hope Mariah and Tessa can find it before lives are on the line.

Other Y&R spoilers state that Victor (Eric Braeden) and Jack (Peter Bergman) will face conflict. What’s new, right? These two are longtime rivals, but their mutual father shocker is poised to make the feud even worse.

Victor will warn Jack to stop digging before he uncovers proof. He’ll think if they leave this alone, they won’t have to deal with the fact that they might be half-brothers. Jack will be tempted, but he’ll decide not to give Victor the satisfaction. It sounds like he’ll basically seek the truth just to spite his enemy!