The Young and the Restless Spoilers: Two Y&R Couples Reconnect – or None At All? 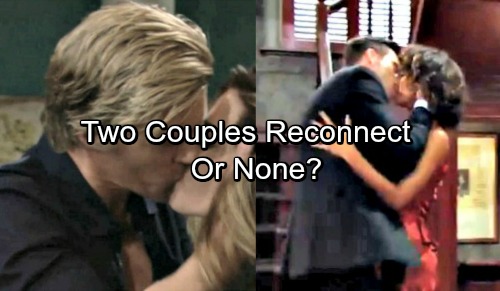 The Young and the Restless spoilers documented the seeming write-up to revive Lane and JTV. However, is one, or both storylines merely a tease? Might both one-time couples actually remain apart indefinitely?

Lily (Christel Khalil) and Cane (Daniel Goddard) seem closer to revival then J.T. (Thad Luckinbill) and Vickie (Amelia Heinle)? Lane is still married, as devoted viewers know, whereas J.T. is tied to Mackenzie (Clementine Ford), though that off-screen character has filed for divorce. So Luckinbill’s recently revived character can’t go public with Vickie, if that’s what both characters intend to do.

Cane’s bold gesture to fly to Paris, France, is very romantic. An unexpected source pep-talked him into making the trip across the pond to be with his true love. That source, Billy (Jason Thompson), is currently blissful with Phyllis (Gina Tognoni) and genuinely wants to see his stepbrother and often-time nemesis reclaim his marriage and family.

Mattie (Lexie Stevenson) remains skeptical that her parents will reconcile. She’s a smart young lady, so her instincts can not be discounted. However, it must also be said that the shock of the pain Cane inflicted upon the Ashby family last year is likely affecting his daughter’s persistent outlook.

Cane’s son Sam hasn’t yet become the type of emotional draw for Lily that was expected in some quarters. The length of her stay in Paris also remains unknown, but could stretch for weeks. So, Cane may need to make more than one trip to the setting of Lane’s remarriage earlier this decade if he hopes to secure his wife’s ongoing commitment.

Vickie has been though the relationship wringer with many guys. Billy has been her muse in recent years. But she slapped his face on Halloween Eve saved Lane’s twins and Reed (Tristan Lake Leabu) from dying in The Underground fire that Dina (Marla Adams) accidentally started. Billy’s lip-lock with Phyllis spurned Vickie’s emotions. Her resultant physical assault signaled to to audience that Villy was, in fact, over.

J.T.’s return was unexpected, but has been welcomed by Victoria. She’s not exactly rebounding, but has basically been rediscovering her past love for the father of her oldest child.

JTV, in this incarnation, could opt to keep their renewed spark quiet until J.T.’s divorce is final. That legal outcome could be realized by spring, when soap time is considered.

If Vickie is on board with a reunion and J.T. has no other female prospects, betting odds would favor another go-round for this one-time couple. Like the potential Lane Part III, JTV is hardly destined. But all factors are in place for a sequel.