BY Sean O'Brien on May 5, 2018 | Comments: 2 comments
Related : Soap Opera, Spoiler, Television, The Young and the Restless 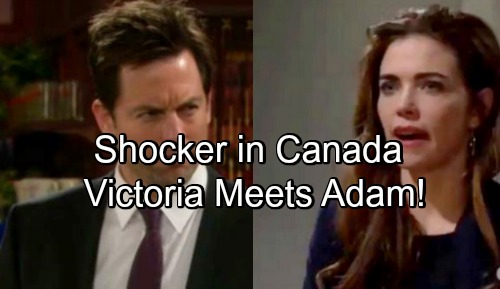 The Young and the Restless spoilers tease that Vickie (Amelia Heinle) will find her brother is alive and in Canada. Yes, this means it’s not Nick (Joshua Morrow) that Vickie and Phyllis (Gina Tognoni) stumble upon, but Adam (most recently played by Justin Hartley).

Phyllis escorted Vickie to Canada as a way to help J.T.’s (Thad Luckinbill) victim. The ruse has Phyllis attending a convention for Fenmore’s. But this portion of the storyline can be used to revisit an unresolved arc as well.

As Y&R viewers recall, a single-engine plane flew away from Genoa City on the night Adam apparently died. That pricey puddle-jumper was intended as Chick’s get-away vehicle, but Chelsea (Melissa Claire Egan) and Connor (Gunner and Ryder Gadbois) weren’t able to accompany Adam. Instead, they ended up at the cabin in the woods, where Chelsea nearly walked into an explosion as Nick and Connor watched from the awaiting SUV.

The plan was to pick up Adam and head for the plane. That didn’t happen, but someone was shown flying away. Interesting then and since.

It’s fair to question time frames within those episodes, or to argue that if Adam lived he didn’t leave the area by anything other than a ground game. But seasoned daytime devotees know to never doubt the ability of Y&R’s writing staff, or any soap’s team of scribes, to fill in the blanks at later dates.

Apparently’s, supposedly’s, and intended’s underscore the nature of soap opera’s non-absolutes. There are few, if any, of those which thereby allow Adam to be alive and living in Canada.

Chloe (Elizabeth Hendrickson – who has been snatched up by General Hospital) handcuffed her target to the bed after shooting Adam with a tranquilized dart. He seemed knocked out and then must (an absolute term) have been blown to bits by the subsequent explosion. Chloe coped to the crime, months later, when telling Chelsea on the day of Khloe’s intended wedding. That led to Hendrickson’s write-out.

Digitally skipping back to modern time, imagine Vickie and Phyllis’s surprise when they see Adam, alive! Will he know his sister? Who will play this recast character? And might Michael Muhney return to the role he initially made famous before departing in 2014?

Answers can be formulated. Since Chelsea recently left GC, she would likely be with Adam, assuming she knows he’s alive. Egan advised that she wasn’t leaving the cast forever, but just for awhile. But reviving the Chelsea character so soon after Egan’s exit is likely not happening. Therefore, Adam must have had amnesia the entire time he’s been gone and isn’t with his wife and son.

As to who’ll play Adam. Well, that topic deserves a column all its own, if this speculative feature proves true. CDL is a leading source for everything linked to The Young and the Restless. Check back regularly for Y&R spoilers and news!