The Young and the Restless Spoilers: Vickie’s Mental Breakdown Quickens, Could Nikki Join Lily in Prison? 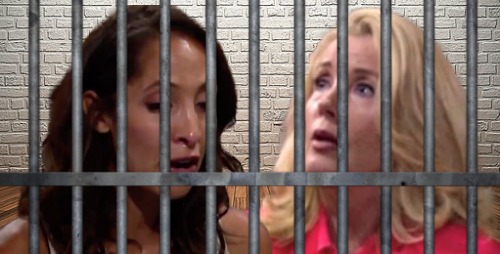 The Young and the Restless spoilers tease that Vickie’s (Amelia Heinle) admission that she can’t handle the aftermath of J.T.’s (Thad Luckinbill) death will lead to the coverup crew’s work being exposed. When that happens, Nikki and possibly, others could be joining Lily (Christel Khalil) in prison.

As readers of this comprehensive soap site know, Khalil has adjusted her contract to recurring status. That previews with Lily’s pending sentence for the vehicular double homicide that accidentally took the lives of Hilary (Mishael Morgan) and Hevon’s unborn child.

As for Vickie, she’s been increasingly frazzled. Her mother and various Genoa City characters have taken notice of what surely appears to be her downward mental slide.

Most recently, Vickie told Nikki (Melody Thomas Scott) that she was heading to her therapist. But that was a lie, intended to conceal her lessening ability to cope.

Nikki followed her daughter from Newman Enterprises to the reproduced Father Knows Best set where Heinle’s character lives. After waiting for an hour in her car, Scott’s character used her key to enter Vickie’s home and went upstairs. She found Vickie fast asleep in bed, which confirmed her suspicions that something was amiss.

J.T. was accidentally killed in the spring. The resulting storyline saw the coverup crew bury his body in Chancellor Park and then believe they were being stalked by his resurrected self, or ghost. Nick (Joshua Morrow) turned out to be the faux doppelganger, in a neat soapy twist. That also served to reveal Morrow’s requested transformation of his character, which had existed in a similar SORAS’d state for the past twenty-four years.

The danger for Nikki, Phyllis (Gina Tognoni), and Sharon (Sharon Case) is that Vickie’s instability will be played into by Rey’s (Jordi Vilasuso) pursuit of the truth. Y&R’s newest character claims to work in financial services and is now acknowledging his interest in J.T.’s whereabouts. It seems likely that his interest in Luckinbill’s absence goes beyond debt collection and could easily be connected to an official investigation.

Phyllis’ comment that Vickie is going to crack rightfully presses fear into the hearts of everyone who was linked to J.T.’s head conk. It seems reasonable to believe that much, if not all of the current drama could have been avoided if only Nikki had followed Sharon’s advice to report what was honestly an instinctive protective action.

Instead, Vickie’s mind is guilt-ridden. She and her coverup crew partners must eventually face questioning, while Nikki could meet a legal judgment day. CDL is a leading source for everything linked to The Young and the Restless. Check back regularly for Y&R spoilers and news!