The Young and the Restless Spoilers: Victoria and Billy Bond Over Nikki’s Tragedy – Villy Reunite In Time For Christmas

BY Sean O'Brien on December 15, 2018 | Comments: one comment
Related : Soap Opera, Spoiler, Television, The Young and the Restless 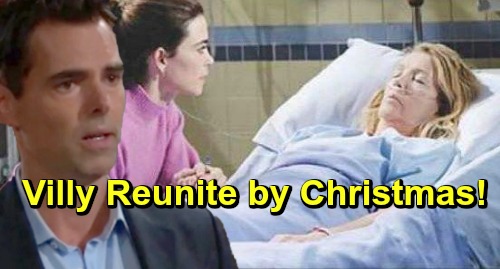 The Young and the Restless spoilers tease Villy back together in time for Christmas. Yes, the odds of Victoria (Amelia Heinle) and Billy (Jason Thompson) reuniting dramatically improve due to near tragedy.

Will Nikki (Melody Thomas Scott) die as a result of Reed (Tristan Lake Leabu) accidentally hitting her on the snowy streets of Genoa City? Unless there’s a tightly held secret walled within Y&R’s sets and offices, that Scott is leaving the cast, then no.

Oh, Nikki will need time to recover and the support of family and friends will prove vital. But her future isn’t the focus of this feature. Instead, legit speculation about one of Y&R’s most charismatic pairings reuniting is in order.

Many dramatic soapy events are written so that multiple character’s lives are impacted and able to be rearranged. As viewers know, Victoria will come to her mother’s side as a single, not as part of a pair this mid-December.

Meanwhile, Billy is alone and not used to that. He needs a woman, preferable Victoria, by his side to keep him in check. Yes, Billy recognizes that his life is less complete without love and Miss Newman was and remains his one and only.

Phyllis (Gina Tognoni), well, she was nice, for awhile. As Nick (Joshua Morrow) has rediscovered, Red is exciting, but also work. The coming coverup crew reveal will confirm that character point, again.

But Billy’s knowledge gain about Vickie’s link to the coverup crew won’t affect him in the same was as Nick. Instead, he’ll seek to defend Vickie, which will follow his genuine emotional support following Nikki’s hit-and-run.

Villy’s marriages and reunions, without the nuptial, are legendary. Y&R teased this comeback after Thompson was recast as Billy in 2016. But the Brash and Sassy scenes that followed developed into nothing substantial.

Recently, it appeared as though Victoria and Cane (Daniel Goddard) could be coupled, as she’d lost J.T. (Thad Luckinbill) and he was strongly missing Lily (Christel Khalil). That mashup seems ill-advised. However, if Villy is revived, Y&R will need to add some type of new wrinkle into the repair.

Villy again? They’ve become more likely than not due to Victoria and Billy’s open dance cards. Mix the emotions of the Christmas season with Nikki’s latest trauma and all that’s swirling with Rey’s (Jordi Vilasuso) ongoing investigation. Then add in two important people, Villy’s children, Johnny (Ryan and Holden Hare) and Katie (Sienna Mercuri), and what might viewers get? A real reunion.