The Young and the Restless Spoilers: Victoria Plans to Confess – Phyllis and Gang Struggle to Stop Her 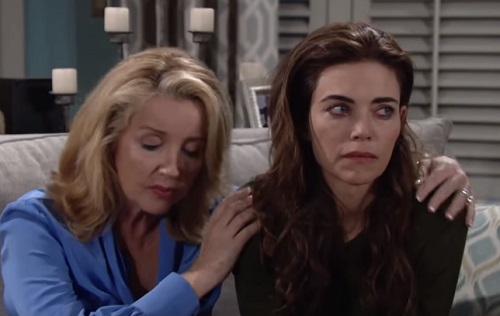 The Young and the Restless (Y&R) spoilers reveal that secrets will lead to major drama on the CBS soap. Nikki (Melody Thomas Scott) didn’t know her own strength, so her fierce blow caused J.T.’s (Thad Luckinbell) demise. That sparked Phyllis’ (Gina Tognoni) plan to cover it up. J.T.’s body is disposed of in Chancellor Park on Tuesday’s episode and what follows is sure to be exciting!

Sharon (Sharon Case), Victoria (Amelia Heinle), Phyllis and Nikki will all try to stick together on this. None of them wanted to go down for J.T.’s murder, so they’ll resolve to keep a tight lid on their actions. It’ll be even more important now that they’ve hid evidence and lied to the cops.

Unfortunately, a guilty conscience will present a real problem. Mal Young, Y&R’s head writer and executive producer, recently offered some clues about one remorseful character. In an interview with EW, Young dished on these interesting partners in crime and how they’ll hold up moving forward. 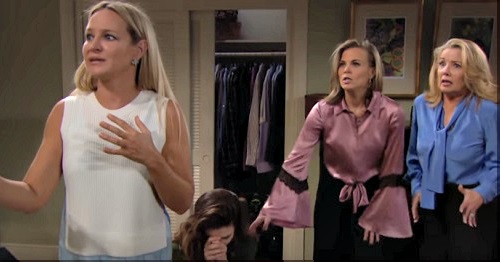 “The next arc of the story focuses on the consequences of J.T.’s death and brings together four characters — Nikki, Phyllis, Sharon and Victoria — with strained relationships to become unlikely allies,” Young said. “This alliance is equally as dangerous as the secret they are keeping because they are only as strong as each other.”

In other words, they could all land behind bars if one of them comes clean. Several people know they were having a party the night J.T. went “missing,” including Paul (Doug Davidson). It’s not like somebody can really take the blame. They were all together, so there’s nobody they can hide behind.

Besides, J.T. was a sturdy guy. Paul would realize it’d take four of them to lug a dead body outside and get rid of it. These facts could come up when one woman’s on the verge of confessing. Young teased, “Their secret will be in jeopardy when someone in the group is overcome with guilt and begins to crack.”

Which individual will be tempted to admit the truth? Let’s consider our options. We can probably rule out Phyllis since this was all her idea. She doesn’t have a guilty bone in her body anyway – at least not when it comes to matters like this.

Next, there’s Nikki. It’s possible she’ll feel guilty since she’s the one who struck the blow. However, it’s tough to believe Nikki would bail on her promise to protect Victoria. Nikki probably wouldn’t risk letting her daughter go to prison. It’d be cruel to put Victoria through that after all she’s dealt with. Victoria’s kids need their mother, so maybe we should take Nikki off the table for now.

Sharon is also a possibility, but she’s so close to getting what she wants. Will she really pass up the chance to reunite with Nick (Joshua Morrow) and play a role in raising Christian (Jude and Ozzy McGuigen)? Sharon felt guilty about keeping “Sully’s” paternity a secret, but that didn’t stop her from hiding it anyway.

Plus, The Young and the Restless spoilers say Nick will do his best to protect Victoria when he learns what happened. It’s doubtful that Sharon would want to provoke Nick’s wrath by messing everything up. Perhaps Sharon will keep her mouth shut, so that leaves Victoria as the guilt-ridden character.

Victoria clearly has mixed feelings about J.T.’s demise. He’s Reed’s (Tristan Lake Leabu) father and they loved each other once upon a time. Despite J.T.’s mistakes, Victoria hates that this is how it all had to end.