BY Marcy Cohen on May 28, 2018 | Comments: one comment
Related : Soap Opera, Spoiler, Television, The Young and the Restless 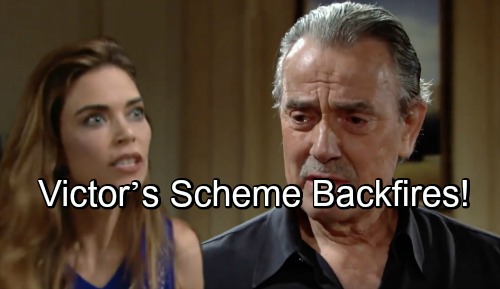 The Young and the Restless (Y&R) spoilers tease that Sharon (Sharon Case) will be proven right. She’s been concerned about Victor’s (Eric Braeden) latest offer and with good reason. Sharon knows Victor always pulls his family members back into drama. Nick (Joshua Morrow) can claim Victor’s changed all he wants, but Y&R fans know that’s just not true.

As Nick returns to Newman Enterprises, Victor will move forward with some sneaky plans. Getting Nick back in the corporate game was only step one. Victor’s full scheme is sure to catch Nick and the rest of the Newmans off guard.

It seems Victor has carefully weighed his options and determined that Nick’s return is necessary. Vic won’t be around forever, but his attempts to groom a new CEO haven’t really panned out. Now that Billy’s (Jason Thompson) getting all edgy over at Jabot, the competition will be revving up. Victor will need somebody who can breathe new life into Newman and Nick may be his best bet.

Victor dropped Abby (Melissa Ordway) like a hot potato for Victoria (Amelia Heinle). Then, he let Ashley (Eileen Davidson) come in and rile Victoria up. The threatened Newman betrayed her father and now Ash is drifting back toward her family’s company. What’s Victor supposed to do with this mess?!

Victor can’t trust Victoria and Abby just isn’t ready to lead Newman Enterprises. Since Adam (Justin Hartley) is gone for now, the future of Newman may lie in Nick’s hands. The Young and the Restless spoilers say Victoria will face some stunning news soon. She may withdraw her support for Nick if he becomes Victor’s official successor. This could start quite a war, which probably wouldn’t bother Victor too much.

After all, Victor enjoys testing his children and pushing them to their limits. He may think all the infighting will propel Newman to the next level. Unfortunately, that may not be how this plays out. Newman could tank if the feuding siblings resort to sabotaging each other. Abby and Victoria will be at each other’s throats next week, so that could be the beginning of major trouble.

Will Kyle use this chaos to his advantage? Is this his big chance to make a name for himself at Newman? How would Jack (Peter Bergman) handle the betrayal? We’ll give you updates as other Young and the Restless news comes in. Stay tuned to Y&R and don’t forget to check CDL often for the latest Young and the Restless spoilers, updates, and news.