The Young and the Restless Spoilers: Wednesday, April 25 – Ravi Returns for Mysterious Arc – Nick and Victor Team Up 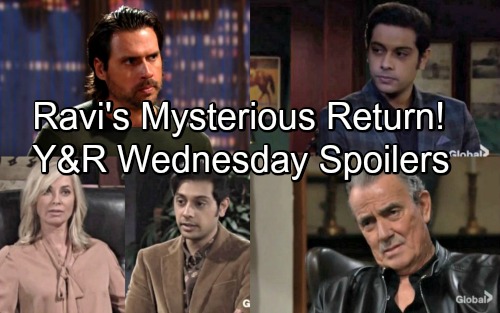 The Young and the Restless (Y&R) spoilers for Wednesday, April 25, tease that a big return is on the way. It’s been a while since Ravi (Abhi Sinha) was spotted around town, but he’ll finally pop back up. Maybe Ravi will have a chance to catch up with Ashley (Eileen Davidson) or do a favor for Phyllis (Gina Tognoni). Those seem to be Y&R main uses for Ravi, but perhaps a real storyline could be brewing soon.

It’d be nice if Ravi could get a new love interest, so the show might find one for him at some point. In the meantime, there’s plenty of other drama for Ravi to get caught in. Will he become part of all the Dina (Marla Adams) mayhem? The Young and the Restless loves to let secrets slowly trickle out, so it wouldn’t be surprising if someone else was brought in the loop on Jack’s (Peter Bergman) paternity.

Of course, Ravi could also just suspect that something’s up. He’ll certainly know if Ash and Abby seem on edge. Whatever the case, Ravi will get back in the action on Wednesday. Stay tuned to see the trouble he’ll find and watch how he’ll handle it.

Elsewhere, Nick (Joshua Morrow) will mull over his family’s drama and make a decision. He’ll realize he needs to resolve any lingering conflict with Victor (Eric Braeden). Their relationship improved while Vic was in the hospital, so Nick would like to build on that. He’ll think it’s time for the Newmans to come together, especially after all the suffering J.T. (Thad Luckinbell) caused.

It looks like Nick will push for peace and Victor will go along with the idea. Their latest truce will allow them to rev up the J.T. (Thad Luckinbell) search. Two Newmans are better than one when it comes to risky hunts.

Unfortunately, Victor and Nick are making a huge mistake. The closer they get to the truth, the worse things will be for Victoria, Nikki (Melody Thomas Scott), Sharon (Sharon Case) and Phyllis (Gina Tognoni). As the search intensifies later this week, Sharon’s guilt will lead to some scary moments in her imagination!