BY Heather Hughes on December 11, 2018 | Comments: one comment
Related : Soap Opera, Spoiler, Television, The Young and the Restless 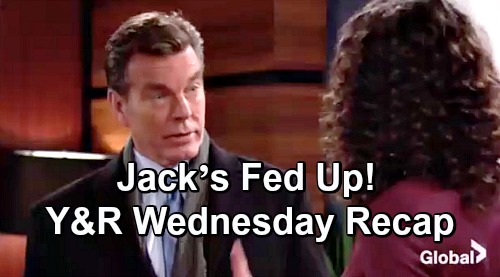 The Young and the Restless (Y&R) spoilers update and recap for Wednesday, December 12, tease that Lola (Sasha Calle) will make a pitch to Sharon (Sharon Case). She’ll reveal that her food truck’s transmission is broken, so she needs to raise cash for repairs. Lola will think they can work out a mutually beneficial arrangement. She’ll want to do a popup in Crimson Lights and include it all her marketing material.

After Sharon gets on board, Abby (Melissa Ordway) will hear the good news. When Sharon praises Lola’s cooking skills and suggests she’ll have her own restaurant before long, the wheels will start turning for Abby. She’ll have an idea that’ll come into play a little later.

In the meantime, Cane (Daniel Goddard) will stop by Devon’s (Bryton James) place to apologize. They’ll patch things up and focus on what Devon’s doing to cope. He’ll admit he wants to throw himself into a Hamilton-Winters overhaul. Devon will want to concentrate on developing his artists and he won’t let anything stand in his way.

At Victoria’s (Amelia Heinle) house, she’ll get a visit from Billy (Jason Thompson). He’ll be worried about Reed’s (Tristan Lake Leabu) vengeful side, so he’ll fill Victoria in on the problem. She’ll just hope she can keep Reed in the dark on Victor (Eric Braeden) being Rey’s (Jordi Vilasuso) prime suspect.

Billy will insist that the truth is going to come out. He’ll think Victoria needs to get ahead of it and tell Reed herself, but she’ll just lash out at him. Once Victoria confirms that Billy will keep his mouth shut, she’ll express her gratitude and give him a hug.

Over with Reed, he’ll drop by the Ashby home. Charlie (Noah Alexander Gerry) won’t be happy to see him, but Mattie (Lexie Stevenson) will want to offer support. She’ll listen as Reed opens up about his J.T. (Thad Luckinbill) troubles, but Cane’s arrival will disrupt their warm moment.

Once Cane hurries Reed out the door, this angry dad will voice his disapproval to Mattie. Cane won’t think Reed should’ve been over at the house, but Mattie will feel like Lily (Christel Khalil) would’ve allowed it. At the athletic club, Jack (Peter Bergman) will tell Kyle (Michael Mealor) that he was stood up by Kerry (Alice Hunter). Kyle will suggest that maybe there was just some confusion on her part.

Afterward, Jack will try to get in touch with Kerry. He’ll get her voicemail and wonder what’s up. Later, The Young and the Restless spoilers say Jack will finally just confront Kerry in person. She’ll blame work for her earlier blunder and hope for a raincheck. Jack won’t be keen on all the games Kerry’s playing, so he’ll walk right out the door!

Next, Lauren (Tracey E. Bregman) will sit down for a meeting with Fen (Zach Tinker). She’ll suggest that if Fen wants to pursue a music career, that’s fine. He just can’t count on his parents for financial backing. Fen will assure Lauren that he’s going to make it in this industry.

Other Y&R spoilers say Abby will share her plans with Devon. She’ll gush about the building she bought and how it’d be perfect for a swanky restaurant. Abby will mention possibly hiring Lola as the new chef, but Devon will have doubts. He’ll think they need a big name, but Abby will set out to prove him wrong with a catered dinner. She’ll rope an excited Lola into it soon after this meeting breaks up.

Lola will hire Fen as a server, which he’ll be thrilled about since Devon’s involved. He’s been eager to butter Devon up and this could be his chance. Back at Victoria’s place, she’ll continue talking to Billy about Victor’s potential guilt. Billy won’t think Victoria should rule it out.

After Billy takes off, Reed will come out of hiding and reveal that he overheard everything. The Young and the Restless spoilers say he’ll be livid with his mom. Reed will wonder how Victoria could lie about Victor killing his father.

It sounds like Victoria’s stress level will soar even higher on Wednesday. We’ll give you updates as other Y&R details emerge. Stay tuned to the CBS soap and don’t forget to check CDL often for the latest Young and the Restless spoilers, updates and news.