The Young and the Restless Spoilers: Victor’s Deadly Showdown with Unhinged Reed – Plans To Shoot Grandpa For J.T.’s Murder?

BY Marcy Cohen on December 11, 2018 | Comments: one comment
Related : Soap Opera, Spoiler, Television, The Young and the Restless 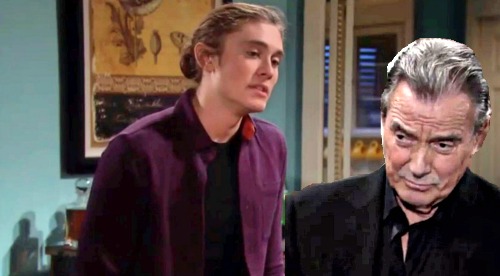 The Young and the Restless (Y&R) spoilers tease that Reed’s (Tristan Lake Leabu) return will have serious consequences. The teen is naturally upset about J.T.’s (Thad Luckinbill) death and wants to see the killer brought to justice. That’s a problem since his own grandmother killed J.T. and his mother helped cover it up.

Nikki (Melody Thomas Scott) and Victoria (Amelia Heinle) will have a hard time keeping their dark secret. J.T. was attacking Victoria when Nikki took a swing at him with that fireplace poker, but that doesn’t excuse their actions afterward. They’ve been lying for months and poor Reed still doesn’t have answers.

Reed’s rage will intensify once he gets updates on Rey’s (Jordi Vilasuso) prime suspect. After he realizes there’s major evidence against Victor, Reed will most likely assume the worst. Victoria will try to convince Reed that his grandpa’s innocent, but he may not buy that. Reed is desperate for someone to blame right now, so it’ll be easy for him to turn against Victor.

The Young and the Restless spoilers say Victor will resurface in time for the holidays. Nikki (Melody Thomas Scott) will be in a fight for her life this Christmas, so Victor has to come home and spark the usual soap miracle. He may try to slip in the hospital undetected so he can avoid arrest at first.

Of course, Reed could hear about Victor’s return and decide to take action himself. There’s surely a reason why Reed’s anger will spiral out of control. Y&R may be building to a shocking showdown. Reed might corner his grandfather somewhere private and insist that he needs to pay. They could certainly have a dramatic faceoff outside in the snow.

Reed might get his hands on a gun and threaten to make Victor suffer the same fate as J.T. Would Victoria catch the confrontation in progress? Could she confess to Reed and stop him from making a terrible mistake? The Young and the Restless could make the most of Reed’s fury if they take this route!

The holiday season will be filled with drama, so don’t miss the twists and turns in the J.T. saga. We’ll keep you posted as other Y&R news comes in. Stay tuned to the CBS soap and don’t forget to check CDL often for the latest Young and the Restless spoilers, updates and news.